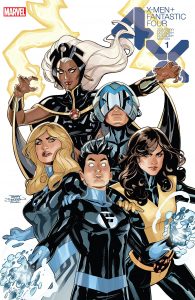 The Dawn of X is upon the Marvel universe and all mutants are welcome to join their brethren on the new mutant nation of Krakoa. While it is not a mandatory requirement to relocate it is an expectation that every mutant visit the new homeland to experience what could be their future. It’s also no secret that Professor X and his ally Magneto want to secure the allegiance of all the Omega Level Mutants, those whose powers and abilities have the potential to destroy reality itself if unleashed. Among these mutants is none other than Franklin Richards, the 4 ½ member of the Fantastic Four and Marvel’s Impossible Boy. Franklin has been one of Marvel’s most powerful mutants since his birth and his ability to warp reality has most recently been used to repopulate the Marvel Multiverse in the wake of  Secret Wars (2015). Yet with Franklin back on earth and the emergence of Krakoa it only makes sense that Franklin look seriously at relocation, even if his parents disapprove.

X-Men + Fantastic Four #1 is the inevitable meeting between Marvel’s first family and their merry mutants since the formation of Krakoa. While these two storied franchises have met more times than I can count, especially back in the glorious Bronze Age where the super heroes of Marvel meet on the streets of Manhattan quite regularly. While this meeting was hinted at in the pages of House of X #1 the rumblings over the future of Franklin Richards begins here. Since returning from his multiversal sojourn with his family and the Future Foundation Franklin Richards has been struggling to find his place within his family and society. While away Franklin’s age was accelerated to a teenager, while this is a big change the even bigger change is that Franklin’s powers are fading away. With each use Franklin’s once amazing powers are diminished, and if this continues in the very near future they will disappear and just like his Uncle Ben Grimm Franklin’s father can’t figure out how to fix him. While this is happening on Yancy St. on the island of Krakoa Professor X and Magneto proposition Kitty Pryde to help them to convince that it is in Franklin’s best interest to relocate to Krakoa. Long time readers will appreciate the call back to 1987s Fantastic Four vs. X-Men where a younger Kitty and Franklin bonded while Kitty was stuck in her phased form in the wake of the Mutant Massacre. Kitty is reluctant at first but then decides it is best that she be there rather than Magneto’s harsher sell to the Richards clan. Anyone who expects a chaotic first contact and hyper inflated feelings on both sides of the equation would be right. Yet X-Men + Fantastic Four #1 is also full of some tender moments and parental concerns that can only be heightened by super powers.

If Dan Slott ever decides to leave the main Fantastic Four title Marvel best give it to Chip Zdarsky as he was born to write the adventures of the FF. He instantly captured all the love, angst, tenderness, and trust that comes along with being a member of Marvel’s First Family as well as digging into the interpersonal issues present within the Richards clan since the Stan and Jack days. Marvel would also be wise to get Zdarsky an X-Men title, specifically a Kitty Pryde focused issue as this is the best Kitty I have read since the Dawn of X began. It also didn’t hurt that there was a call back to the Fantastic Four vs. X-Men which was a wonderful continuity heavy limited series that was a must read for any fan of Claremont’s X-Men in the ‘80s. Terry Dodson’s art was a nice addition to this title yet it fell flat in places due to the inks by committee as three different inkers worked on this issue. Dodson’s art is always the best when his wife Rachel handles the inks. Hopefully this was just for the first issue and things get smoothed out going forward as this was a fantastic first issue of what will hopefully be an incredible mini-series.

Verdict: Buy!  X-Men + Fantastic Four #1 was a highly enjoyable first issue of the first crossover between the post Dawn of X X-Men and the broader Marvel Universe. Chip Zdarsky has a gift for writing modern super hero tales with bronze age sensibilities. While Terry Dodson’s artwork is not consistently great throughout the issue it is still a step above many artists and the quality of the story overcomes any art deficiencies.