Adapted and Written by Julien Blondel and Jean- Luc Cano 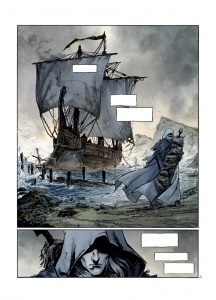 This reads like a classic modern fantasy tale (as well it should as that is the basis for the comic), and a good one at that. Now you might think that this being the third part/ chapter/ series about Elric, that there is no way on earth you can understand what is going on apart from going down a wiki hole. However, the wonderful people behind this comic put a succinct previously on page and character profile page that catch you up with all the misadventures.

Brief update, main character Elric – the emperor of Melnbone exiled himself as to not fulfil the prophecy that he would destroy his people and the woman he loves, so he goes out into the wilderness with a soul-consuming sword. This is where we find him, contemplating his life when he interrupts some ‘merchant’ of human livestock where he barters with them ending with more than a few souls being consumed. One of the now ex-slaves, Smiorgan becomes his companion and from there we are off to the races with them finding themselves summoned on a quest, that might just aid Elric to defy the prophecy.

Blondel and Cano do a stellar job of adaptation and writing, as whilst I have not read the original novels, I have read many fantasy books and this comic reads exactly like them but not in the overly dense descriptions but in the way, it captures the epic atmosphere of fantasy novels.

Telo and Recht’s art fits the ascetic of the tone of this tale. The inking for my taste is sometimes too heavy and the backgrounds and faces lack detail occasionally, going more minimalistic in contrast to the more realistic depiction of everything else. The colours by Bastide stand out as the first couple pages are of greys, whites and black, so when the violence and hence blood red appears, the use of red creates a great visual contrast.

Verdict: Check it out. If you’re into fantasy or fantasy novels, this adaption is a great one as it perfectly captures a novels feel without being overwritten.