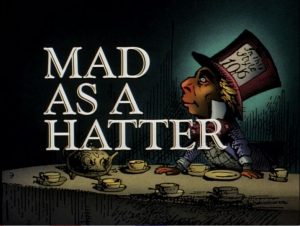 Mad as a Hatter

Synopsis: [From IMDB see: here] When a jealous scientist with a passion for Alice in Wonderland uses his mind control devices to have his dream girl for his own, Batman must intervene.

Originally introduced in 1948 within the pages of Batman #49, The Mad Hatter (AKA Jervis Tetch) has always stood as one of the strangest and most fascinating members of Batman’s rogues gallery. Created by Bill Finger and Lew Sayre Schwartz, the character began as a simple riff on the famous character from Lewis Carroll’s Alice in Wonderland, before evolving into a variety of incarnations, ranging from a simple ‘Mind-control’ obsessed mad scientist and serial murderer, to the hemp smoking pederast of Grant Morrison’s Batman: Arkham Asylum.

With such a varied and at times openly problematic history, it is perhaps fair to say that the Mad Hatter stands as a difficult character to adapt when it comes to animated television. Thankfully, like with such characters as Mr Freeze and Man-Bat beforehand, Batman: The Animated Series’s writing team again prove themselves worthy of such a difficult task, again focusing their reinvention on pathos and psychology, focusing on the actions that motivate the character, rather than simple gimmicks and ‘shock’ value.

In terms of plot, Mad as a Hatter stands as one of the best in the series to date, offering a degree of depth and development within its short 20 minute run time. The episode introduces Jervis Tetch, as a Wayne-Enterprises scientist with a fascination with Alice in Wonderland, who has developed a special mind control device whilst working for the company.

A gawky and socially awkward man, Jervis not-so-secretly pines for his co-worker, Alice and is dominated by his controlling boss. When Alice appears to split with her boyfriend, Jervis attempts to win her heart by using his mind-control devices to create what he considers the perfect date, but soon finds himself disappointed when Alice returns to her old boyfriend. Angered by this rejection, Jervis takes on his Mad Hatter persona and uses his mind-control devices to kidnap Alice, an act that leads him into an eventual confrontation with Gotham’s dark knight protector.

Within the capable hands of Paul Dini, Mad as a Hatter manages to create an engaging and frighteningly human incarnation of the Mad Hatter. Excellently voiced by the late Roddy McDowell (of Fright Night and Batman 66′ fame), Jervis Tetch first stands as a sympathetic oddball; one who eventually descends into a chasm of narcissism, jealousy, immaturity and male privilege, becoming a creepy and abusive villain. While he may initially have good (though perhaps selfish) intentions, he is a character who like so many Bat-villains, is grounded and corrupted by his a flawed humanity. He is a character who becomes consumed by his own selfish agenda, caring little for the lives that are destroyed around him. In doing so, the Mad Hatter becomes a scary villain, one who like so many others is taken over by his egotism and desires.

Such a human representation is further reflected within the Mad Hatter’s character design. Eschewing the character’s signature diminutive stature and red hair from the comics (a look that would partly return for The New Batman Adventures), the series opts for a much more refined look, one that comes complete with blue suit, buck teeth and blonde hair.  The result is an excellent visual design, one that keeps the character’s weird and aloof personna, without truly descending into the camp silliness sometimes associated with the comic book character. It is a design that fits perfectly and doesn’t feel out of place within the storyworld set by the Animated Series’s creators.

While the actual character development  and presentation of the Mad Hatter may prove to be one of the episodes most successful selling points, this is not the episodes only strength. Taking advantage of both the Mad Hatter’s mind control gimmicks and his Alice in Wonderland obsession, the episode also uses such references within many of the action sequences, creating surreal and colourful set pieces that feel fun and fresh.

Whether it’s the use of a Wonderland amusement park as the Mad Hatter’s HQ in the final act (homaging the Dick Sprang era with its elaborate use of oversized props) or the mind control induced characters (the Walrus and the Queen of Hearts etc) that fight Batman, the episode takes great inspiration from Carroll’s original novels, even referencing the terrifying Jabberwocky when Batman eventually thwarts the Hatter.

Alongside a great score and voice acting, the episode also comes complete with some excellent animation, merging the strange, weird world of the Mad Hatter with the grim, atmospheric world of the animated series. From the beautifully spray-painted backgrounds of wonderland, to the smoothly animated fight sequences between Batman and the Hatter’s mind controlled slaves, the episode also manages to deliver the required visuals for children’s animation, as well as the previously mentioned plot, character development and action.

In what could have been a tricky character to include within the series, Mad as a Hatter manages to integrate the Mad Hatter within the noirish prism of Batman: The Animated Series’s Gotham City. By re-imagining the Mad Hatter with a grounded, distinctly human backstory, writer Paul Dini is able to create a relatable character whose descent into abusive, masculine privilege becomes all the more unsettling as it is powered by understandable human emotions. With an interesting, relatable story, dynamic animation and action sequences, Mad as a Hatter works as an effective origin story. While it may not work as the best Mad Hatter episode (that is reserved for the excellent Perchance to Dream) it does work as the perfect introduction to the Mad Hatter, particularly within the Animated Series’s sand box.