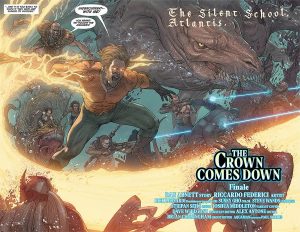 It’s not the destination but the journey, this phrase could not be more accurate for Aquaman. As we all know that eventually Rath will be unseated from the throne of Atlantis, and normal order will resume, well as normal as an underwater kingdom can be. However, Abnett looks to throw some curveballs, along the way. This issue is a major point for the fight for Atlantis and sets up perfectly Mera for her solo title coming out next week.

We pick up where the last issue left off with Aquaman and the depleted undercurrent, rebel force, storming Rath’s facility which enabled the Crown, a magic dome, to surround and contain Atlantis. What results is an epic magic vs beasts vs sheer force of will and it’s a sight to behold. Abnett injects a real sense of urgency into this action as the longer it takes to get the crown down, the more likely there will be severe consequences for Mera who has through dodgy magic been temporarily cursed to not be able to breathe underwater. An unlikely ally aides Aquaman to prevail, but Rath is now made aware that he is still alive. Abnett ends the issue by clearly showing where both the main title and the Mera miniseries are headed and not in an expository way.

Abnett has been crafting an epic tale of politics, relationships, and a good dose of magic. He has created a new interesting dynamic between Arthur and Mera which is not something that can be said very often as they have been one of the long-lasting relationships in DC comics. Abnett has created a situation that has been building up throughout his run which has effectively reverse Arthur and Mera’s roles, but it feels natural and slots right into the deep world of Atlantis he has explored.

Federici’s art is stunning in this issue, his depiction of a sprawling underwater battle is extremely evocative, especially with Gho’s colours for the magic creating light in the dark depths. The art elevated an already great story to a must get comic.

Buy. This series is consistently great and issue thirty-three is no different, Abnett knows how to write moving relationships, and complex political intrigue; whilst injecting some strong story motivated action. This paired with some amazing art makes this a brilliant comic.