Story and Art by Kohei Horikoshi 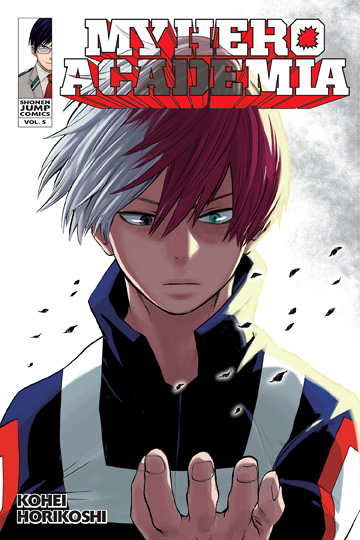 Ah, the inevitable sports festival in Japanese manga. High school students banding together as a class to forge deeper bonds and demonstrate their physical prowess. Girls giggling as boys compete, boys fighting to see who is number one…I love reading sports festival arcs. My Hero Academia is a little different in its sports festival, namely because the students possess superhuman quirks.

The UA sports festival features a tournament between students to determine the strongest first-year student. Volume five opens as Uraraka and Bakugo face off. These two could not be more different in terms of their powers, and each needs to find the way to outmaneuver the other. This would be true for the other match-ups like the one between Midoriya and Todoroki, except there is something different at play. Midoriya’s inheritance of the One for All separates him from his peers who were born with quirks. Midoriya’s choice to become a hero despite not have innate abilities indicates that his response to adversary is illogical from a Quirk’s perspective. The resulting match between Midoriya and Todoroki is one that will have a lasting impact on both boys, especially Todoroki.

Though the majority of this volume focuses on the sports festival tournament, there are important moments of character development, such as the aforementioned response that Todoroki has to Midoriya during his match. Uraraka has a heart-to-heart with the people she loves the most, and Tenya is about to face some pretty rough stuff. Midoriya is not left out from some character progression as he has a discussion with All Might and learns more about why he has the One for All power. Horikoshi’s ability to weave the personal moments in between strong actions scenes without the pacing slowing down or becoming jagged is outstanding. When I read the moments of character development during the tournament, I could almost hear the crowd of students watching the tournament in the background.

My Hero Academia has an interesting artistic challenge in that each character needs to demonstrate a different kind of quirk in order to be visually different from others. Midoriya has his one-finger hit, channeling just enough power into the smallest part of him to curb One for All. Todoroki’s split powers and their manifestation have to differentiate from Midoriya’s, and they certainly do, especially in the second half of their match. The same goes for Todoroki and Bungo. The flow of action during the matches are never dropped, and the intensity of the moment is conveyed through heavy speed lines, sharp angles, and larger panels.

Buy. My Hero Academia is a surprise hit for me. I started by watching a few episodes of the anime, but ended up getting a Shonen Jump subscription to get more of Midoriya and his classmates. I wrote a few weeks ago that My Hero Academia is a good place to start if you are a fan of superhero comics looking to try manga. I still stand by that recommendation with volume 5, especially with the way the story moves forward after the tournament.

Thanks to Viz Media for providing a review copy of My Hero Academia. Banner image from Viz Media.