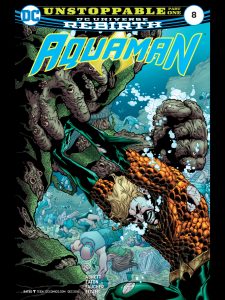 Coming hot off the heels of Aquaman and Mera’s explosive meeting with Superman, Arthur is left with an ultimatum; solve who is framing Atlantis for the destruction of the USS Pontchartrain or else. Of course, it’s never that simple, is it? A chastised king still has duties to his people and with an approaching marriage, to a foreigner nonetheless, there are traditions that must be honored.

Our issue opens up with Mera facing the ritual trials to prove that she is, as an outsider, worthy of marrying into the Atlantean dynasty. Unbeknownst to her or Arthur, the ritual is not a short-lived endeavor with months of study to be undertaken. While a romantic gesture and one much needed to hopefully alleviate some of the pressure on Arthur’s shoulders from his detractors, it leaves Mera the odd one out. She can either fight alongside her fiancé to defend Atlantis thus sacrificing her right to marry him or ignore the war-horns to prove her “worth”, despite Arthur’s indifference to old customs and traditions. Having just gone toe to toe with Superman to being written off in a lose-lose situation is not the path Mera should be heading down and feels as if it’s a huge step back. So far, she has been equally as fearsome as Aquaman; a character that can stand on her own without her significant male counterpart and hopefully she stays that course. That being said, it’s nigh impossible to imagine her not having an intricate role in upcoming events.

While Mera must face her trial alone, Arthur is left to defend Atlantis from an unknown threat. Action on the subsequent pages is just as enthralling as any the series has seen. Once revealed, the monsters identity is an obscure one, so much so, we have a panel explaining what exactly it is. Yet, his presence is ironic and brilliant. Arthur, having finally voiced his opinions on being the black sheep of the Justice League, must now, on his path to redemption, face an unstoppable force that has fought the League on equal footing alone.

While there are a couple complaints about the story, the art more than makes up for it. The sense of being underwater is perfectly conveyed with great use of bubbles and wildlife. Fight scenes are dynamic with intricate minute details, as shown in the seaweed that initially covers our beast. Faces have normalized, with stunning Mera and Arthur showing Eaton’s best. Yet, for every praise, there can be criticism and here, its background characters. Once the scale shrinks, faces and bodies become distorted, losing all definition and leads to a couple awkward looking panels including an Aquaman who appears to be stolen straight from a 1950’s comic.

Not to be outdone, Faucher and Altaeb help round this book off with great inking and colors. Shadows are well represented and each panel has great depth. Scales on Atlantean armor are perfectly detailed and muscles pop with bodybuilder strength. Colors shine with blues and whites coming together to form striking underwater scenes. Explosions look great with gorgeous yellows that are only outdone by Arthur’s hair. Even our beast, despite having a uniform color palette, looks great and those eyes! Talk about intimidating! If kept up, this art will draw many more eyes towards this series on merit alone.

Check it out. While a couple gripes surface, they are heavily outweighed by gorgeous fight scenes, an unexpected villain, and an intriguing revelation of the beasts true motive. If you’ve been waiting to jump on the Aquaman bandwagon, go ahead, take that leap and start enjoying one of Rebirth’s most underrated rides.

Follow
Currently serving in the World’s Greatest Navy, Miguel, a recovering World of Warcraft addict, is currently working towards his B.A. in English while stationed in Washington, D.C. While not defending America from the ever persistent Atlantean threat, he…