Armstrong and the Vault of Spirits Review

Art by Cafu with Darick Robertson 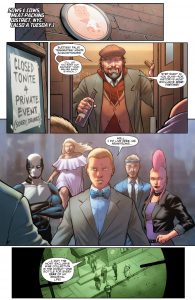 Keeping mementoes of your past is not unusual, Armstrong’s keepsakes though are bottles of wine, one for every year he has been alive; and are in a futuristic safe that only opens once a year, otherwise, Armstrong would drink it all, so not the usual small memento.

This one-shot is split into two timelines, one following Noah after his stint in the ark. The other is Armstrong the immortal drunk showing off his collection to an amalgam of Valiant’s major players, with the Villains of Valiant planning to steal some of the historic wine, because what else will they do they are villains. The two storylines eventually coalesce into a funnily clever way that truly exemplifies Armstrong as a character. Van Lente does an admirable job to elevate this above being an inconsequential, run of the mill one-shot. Ultimately, though it is weighed down at times by the exposition and introductory nature of the comic as many of the other valiant players are there but only in lip service to serve as a jumping on point for the Valiant universe. Van Lente’s character work on Armstrong and his relationship both with Archer and his brothers though is great, showing both his surface-level humour but also the connections and depth he has as a character.

Cafu and Robertson art is used to contrast the two timelines with the more sleek and softer tones of the present compared to the thicker inks and rougher pencils of the past making it feel more harsh and older instantly. The art doesn’t pop off the page, but it is good standard art and serves the story well.

Pass. This is okay if you want to start Valiant, but not great. If you love Valiant, it might be worth picking up but it does not have anything that makes it intensely interesting as a one-shot and feels like it fits more as a side story or backup than a standalone comic.