“At the moment, allies were unaware of the German ruse.  This would soon change.” 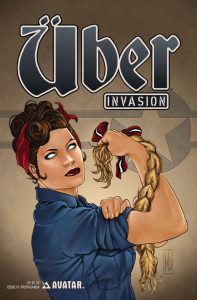 with superhuman elements.  In Über Invasion, Gillen toys with the idea of what it would have been like if the Axis Powers had created nuclear bombs before we had.  However, Gillen substitutes nuclear weaponry for the equivalent of Nazi X-Men, and the result is catastrophic.  This comic is not for the feint of heart nor for those who read comics solely for their escapism.

Über Invasion is rich with World War Two history.  Gillen has clearly done his homework — the seasoned writer references Operation Barbarossa (the German invasion of the former U.S.S.R.) and throws in some German (such as Übermensch, or ‘Superhumans’) when referencing enhanced Nazi soldiers.  The very word “Über” is haunting in this context; Nazi Germany did view itself as superior to other cultures, and this philosophy was the focal point of Hitler’s rabid war machine.

Gillen doesn’t focus on this aspect, and he doesn’t have to — chances are that if you’re picking up this comic, you have an interest and a knowledge base in the subject matter.  That’s the beauty of this comic.  While it does have its fair share of historical footnotes (both real and imagined), you won’t be bogged down by them.  Gillen really allows the story to unravel at a steady, brooding pace.  You’re a fly on the wall in every scene, viewing carnage and macabre alternative history in real time.  Occasionally, the different classifications of Nazi superhumans is somewhat confusing, especially if you don’t have a grasp on basic German.  However, you won’t get lost reading this comic, and the next issue or two will likely tie some loose ends.

Much like Gillen, artist Daniel Gete (Absolution: Rubicon, Crossed: Dead or Alive) allows the story to tell itself.  The panel formatting, not to mention the art itself, is truly cinematic in pacing and quality.  Über: Invasion‘s brand of violence is as uncompromising as a blitzkrieg, and Gete’s work shines brightest amidst chaos.  The detail of his art is the only thing that outshines its brutality.  Readers will relish the quieter moments of this comic and truly appreciate them, for they are buffers between storms.

Verdict: BUY.  Yours truly studied World War Two pretty extensively in college.  Gillen really knows his history, and is able to tell a cold and calculated story in a way that illuminates the terror of the German war machine without glorifying it.  He also provides three pages of text as an afterword that is almost worth the $3.99 on its own.  Gete’s terrifying hyper-realism compliments Gillen’s text, making the final product a must-have for history nuts.  However, you don’t have to be well-versed in World War Two in order to enjoy this comic.  You simply have to enjoy good story telling and have a stronger stomach than Gillen’s X-Men work requires.