“Behind all the smaller stories, there’s always a big story ready to come knocking.” 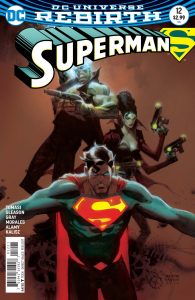 living zombie myth and current government employee.  Your eyes do not deceive you, this is all in a highly successful, mainstream DC comic.  It might not entirely make sense to you — however, DC has used Frankenstein as a character since debuting in Detective Comics #135.  In their 2016 encounter, Frankenstein and Superman square off after the legendary monster wreaks havoc in Hamilton county, with Lois and her new employer playing no small role in Frankenstein’s visit.

Creating an air of vulnerability is one of the great hurdles to producing an enjoyable Superman story.  The protagonist is faster than a speeding bullet and can bend steel, so he’s rarely threatened himself.  However, Tomasi and Gleason continue this delicate balancing act where Superman performs herculean feats while demonstrating their difficulty.  If you are confused as to why Frankenstein is in a D.C. comic, the all-star writing team gives you a succinct explanation.  It won’t answer all of your questions, but this is just the first issue in this story arc.  There’s one scene involving Lois that’s a callback to Superman #5 (one of the best issues of this run) and is fantastic.  I can think of a couple contributors and podcast hosts for Talking Comics that will surely get the feels when they read it.

The art has been top-notch since Superman: Rebirth.  This issue is no different in that regard, but Frankenstein really helps add a certain spice.  His steampunk aesthetic and weaponry is a nod to his legend’s 19th century, Industrial Revolution roots.  When there’s an immediate sense of danger, the background becomes a solid, frantic black and red.  It’s very reminiscent of a Quentin Tarantino scene right before someone goes on a murderous rampage.  Rob Leigh’s Frankenstein lettering is a nice touch, with the word bubbles becoming jagged and the text dripping with dread.  There are a few iconic art scenes, among them a farmer coming face-to-face with the monster and another with Superman calmly hovering above the sword-drawn creature.  Doug Mahnke (Green Lantern, Batman) has produced some of the best pencil-work of the year.  This issue is no different, with Mahnke offering several iconic moments at the tip of his pencil.

Verdict: Buy.  This issue offers intrigue galore.  For example, we will all want to know what exactly brought Frankenstein to Hamilton county.  Yours truly has never read about Frankenstein outside of the 1818 Mary Shelley novel, so you’re not alone if you have questions when you finish reading.  However, you also won’t be alienated by this story if you’re not familiar with the monster’s role in the DC universe.  On top of it all, feel free to consume some of the best ongoing artwork in all of comics.

An alien farm-boy fights a zombie government agent… how can you not be on board?