WARNING: This review contains SPOILERS for episodes 1-2 of The Light of September 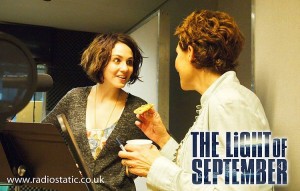 The morning after the rocket launch is a grim affair aboard the Venus. Man may very well be able to travel faster than the speed of light, but the crew is hardly celebrating as they mourn Dr. Alceta’s death by drowning after falling off the side of the ship. Thing is though, some of the crew members only seem to remember Dr. Alceta getting wet last night, and Dr. Alceta himself seems more than a little perturbed by the fact that people are ignoring him completely.

Three episodes into the series, I can accept a ten minute runtime in exchange for a tightly focussed narrative centred around a single concept. This time it’s a reaction to Dr. Alceta’s drowning / not drowning scene from last week, and the crew struggling to wrap their heads around what’s going on makes for a compelling bite-sized story bursting with character moments, particularly for Dr. Alceta, May, and Allan. Sitting down and relistening to the first three episodes in one sitting, my satisfaction level is much higher than it had been hearing the episodes one by one. Like the difference between reading the trade paperback of a comic versus single issues, the story is unfolding slowly, but it forms a cohesive whole.

Confirmation that the two versions of the event from last episode officially both happened at once gives me the sci-fi hook to The Light of September that was initially advertised in the run up to the first episode’s release. While the fallout from this anomaly is explored in depth, my only complaint so far is that I want to see more, especially if the presence of these anomalies continue to come accompanied by the haunting synth and choral soundscape that was heard last episode and repeats here again when converging events occur.

The standout moments of this episode in contrast to the last are situated in the character interaction and drama. That screams of classic science-fiction storytelling to me, where the characters relate to each other overtakes the weirdness of the plot. It’s undoubtedly the right kind of science-fiction for audio. Tamsin Greig’s Captain continues to fascinate me with her unerring desire not to engage with her crew and I want to know more about her past each time she refuses Bjorn’s suggestions. Dr. Alceta also shows real uniqueness in his character when, immediately after seemingly re-emerging from Schrodinger’s limbo, his first need is to empirically understand what the other crew members perceived while he was ‘away’.

Without spoiling too much, the episode ends in a blazing action set-piece that puts our entire crew in jeopardy. The tension for this final conflict is built up throughout the episode and when that tension breaks, the tone is immediately frantic and desperate with the whole ship on alert. The sound design here is absolutely wonderful, giving an immersive, visceral, yet depressing atmosphere that emphasizes just how much everything’s going to hell. McCoy gives his best performance of the series so far when he’s given a real character moment beyond just swearing and my heart breaks for him when the foul mouthed engineer’s voice cracks into a sob in the episode’s final moments. The fact that the sounds of battle continue over the discordant latin music of the end credits is a great touch. I am undeniably excited for episode four.

Check It Out. We’re at the point in the series where the concept and direction for The Light of September is clear. Each episode is moving the plot forward in interesting ways and episode four looks like it’s just about to really to stir shit up. Where episode two introduced the idea of multiple events happening at the same time, this episode proved the viability of that concept as a storytelling device. The end scene has me ready and excited for episode four.

Remember you can subscribe to The Light of September on iTunes or directly from Radio Static’s website where you could also potentially fund future episodes of the series. Episode four is currently less than halfway funded, and could potentially not be released without further support from its audience.

You can also go back and check out our earlier reviews for episodes one and two for those interested in more of my opinions on this independent audio series.