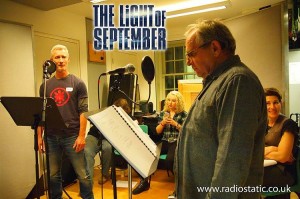 Apprehension and excitement mingle in the air as the crew of the research ship Venus anticipate the launch of a light-speed probe that would defy the laws of physics. A cold captain steels herself away on her bridge, and time and space are debated rambunctiously in front of a small TV screen below decks. This is how The Light of September’s second episode greets us in a fitting continuation from the end of episode one.

In my review for the first episode, I highlighted Radio Static’s work with sound and their stellar cast in the construction of The Light of September as an audio series, while criticising both its length and lack of plot as elements I hoped would be expanded upon later. I’m happy to report that things do begin moving forward here in episode two. There’s a better shape to the story and I can get a clearer picture about where this series is headed. More meat in this episode means better storytelling. Even with more going on in the short episode length, it doesn’t feel packed or rushed, getting me genuinely excited for what’s to come next instead of cautiously optimistic as I was last week.

I said in my last review that one of Radio Static’s greatest strengths in their productions is their cast. They’re even better here. Rather than merely being introduced, they are now interacting with each other (instead of solely May) in a genuine and natural way. The opening of the episode introduces us to Tamsin Greig’s (of Black Books and Episodes) character of stern and serious Captain of the ship, and Sylvestor McCoy is once again telling listeners to piss off in laugh out loud streams of expletives. I’m also really beginning to love the character of Bjorn and his casual, rambling dialogue. I enjoyed his scenes particularly, yes, absolutely I did, and smiled a little more in every scene he was in.

The real selling point, however, is the first instance occurring of what I would consider sci-fi. Hand in hand with the light-speed probe’s launch, something happens in a moment beyond the realms of the characters’ perception or understanding that made the future of this series potentially very interesting. Though I won’t spoil it, the trick of this scene is spectacularly geared towards the strengths of audio and it did require multiple listens to fully appreciate.

The music in this sequence also deserves special attention. Droning, pounding synths automatically clue the listener into something that is off and add to the moment in a visceral way. As a sucker for those synth-filled soundtracks of John Carpenter movies and the Vangelis Blade Runner score, I feel completely connected to what they’re trying to accomplish, and as the pounding slows and strings transition into the next scene, the otherworldly sense of dread is felt by listeners on an emotional level. The episode definitely takes on a darker, more sombre mood after this point and the sound design cues it perfectly.

Check It Out. I’m way more confident in telling you to put your headphones on this time. The plot is moving forward, and both the strengths and limits of the medium are being used cleverly to great effect. The episode was still short and I still feel like it ended right as things got interesting, but if the standout moments of this episode are a clue to where the future of this series is headed, I’m on board.

Subscribe to The Light of September on iTunes or Radio Static’s website where you could also potentially fund future episodes of the series.

Go back and check out the review for Episode 1 HERE.