Godzilla is in Hell. 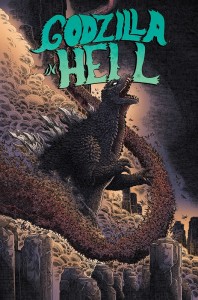 That’s about as much story as there is to be found in the five-issue IDW mini-series Godzilla in Hell, collected here in trade paperback.

Ostensibly, the giant lizard protagonist is working his way through the various levels of Hell like he’s peeling back some damned onion, but other than that, there’s little to connect the five separate stories told by five different creative teams. The variety usually works, though, perhaps mimicking the forever-shifting abyssal landscape and how Godzilla might perceive it, though admittedly, that might be reading into the presentation just a bit too much.

Along his trip, Godzilla faces off against demon versions of various kaiju and other elements of the Toho movies’ universes. Some of the monsters are instantly familiar to even casual audience members, and others are deep cuts that more dedicated ‘Zilla-folks will find satisfying. These are stories made by Godzilla fans, and they treat the character in a way that people with attachment to the thunder lizard will appreciate.

Bob Eggleton’s contribution is the stand-out chapter, as far as art is concerned. His painted pages capture the murky chaos of the underworld as Godzilla falls deeper and deeper into Hell. In a collection marked by big drawings and splash pages, Eggleton’s introduction of King Ghidorah is the best.  As the battle commences, Godzilla is on the nasty end of a three-headed lightning blast:

The art in the other stories swings from fairly generic comic book art to overly cartoony. Nearly all the stories experiment with page layout and design, and though the effects are a bit uneven, the attempts are admirable. The stories struggle with the lettering. For the pieces that feature digital letters, these can feel too detached when placed over the visceral depictions of Hell. For the hand-lettered pages, the letters feel rushed and sloppy in spots.

It’s good, then, that there aren’t many words in Godzilla in Hell. When there are a lot of words—through captions and bellowing beasts—we get a lot of phrases like “Become one with Hell,” repeated words like “the leviathan,” and writers trying to figure out how a monster’s roar should be spelled. The lack of words makes for a quick read, perhaps resulting in story that’s a bit light for casual fans. The final story, by writer and artist Dave Wachter, is the best amalgamation of writing, art, color, and lettering here in this collection, noteworthy for its use of a quotation from Buddha. You wouldn’t think it works in a collection about Godzilla in Hell, but it does, and well.

VERDICT:
Buy it but know going in this is ten minutes of “reading” at best. You’ll return to it for the art, and for Godzilla goodness, but the story won’t last in your mind any more than a snowball does in Hell.