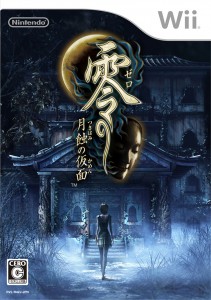 The year is 2008. It’s been three years since Fatal Frame has released a new game. Some were losing hope that another one would ever exist. But then, suddenly, there was hope again as we began to hear tell of Fatal Frame 4: Mask of the Lunar Eclipse! Finally, a new Fatal Frame game! But, what’s this? Tecmo isn’t the developer… Nintendo is the publisher… and it’s a Wii game… it’s a motion controlled horror survival game… oh joy. Not that anyone in North America or Europe who might have been looking forward to that would get to play it since all releases besides Japan’s were cancelled. Don’t you just love when Nintendo gets their hands on a beloved franchise and then screws it up the butt because they have no idea how to deal with third party developers?

Okay, okay, as much as I’d love to go off on a Nintendo vs non-Nintendo developers tangent, we’re here to talk about Mask of the Lunar Eclipse. Thanks to Wii hackers and Fatal Frame fans there’s been patches and subtitle translations that are nothing short of a pain in the ass to get, but the hassle of hacking gets your hands on a game that otherwise you couldn’t get, so it’s worth it yeah? Let’s find out, shall we?

Shortly after a kidnapping that took five young girls underground for a ceremonial Kagura dance, Rougetsu Island is abandoned. A mysterious incident occurred and none of its inhabitants were left alive. Sounds an awful lot like a horrific sacrificial ritual failed, doesn’t it? We all know what this means, right?

The five girls that were kidnapped were rescued by a detective named Choushiro Kirishima and they and their families were moved off island. Fully grown now, each of the five women have absolutely no memory of their childhoods before the kidnapping besides the lingering trace of a certain melody. Under mysterious circumstances two of the five have died, prompting two to go to their childhood home to investigate. When Misaki and Madoka don’t return, Ruka, the last of the kidnapped girls, goes in search of them and her own lost memories. But something is seriously wrong on the island. The hostile spirits of the inhabitants roam and a strange disease called Luna Sedata Syndrome, that revolves around the moon, is still being spread. The answer to everything lies within a sanatorium but is it possible to survive long enough to find it?

Through the bulk of the story you play as three different protagonists: Ruka (the main playable character), Misaki, and Detective Kirishima, plus there’s a small introduction chapter as Madoka, you move through the haunted sanatorium on Rougetsu Island. The game is fetch-quest based with random encounters and jump scares strewn throughout the location. You have your trusty Camera Obscura and a new weapon called the Spirit Light. It’s a flashlight that functions (somehow) as a camera and you wield it when you play as Detective Kirishima.

Concerning each character that you play as, the Spirit Light is the only difference. Well, that and Detective Kirishima is a man. Unlike The Tormented’s multiple characters that each have something unique about their game play, there’s nothing special about Ruka, Misaki, Madoka, or Kirishima. No one moves faster, no one boasts a more powerful camera, no one is physically stronger: there’s nothing. It’s just there to break up the story and proves, once again, that more is not always better.

While on the topic of game’s characters let me say that their designs are once again angering. Much like the other games before it, the characters all suffer from stony facial animations and lackluster voice acting, although the original Japanese voice actors seem to do it better than the English dubbers they brought in for games 1 through 3. Of course the voice acting is a lot less egregious than another problem that, not only this one game, but the Fatal Frame franchise (and most games/CGI related things if I’m being honest) has done over and over again. I’m speaking, of course, about the physical designs that women get stuck with.

Catering to the male gaze aside, you’re still never going to feel connected to the characters because the game doesn’t give you anything to connect to. You’ll have plenty of little costumes to dress them up in, but their back stories and motivations are brief, weak, and unappealing to an average person. Why? Because there’s few that have been through what the girl’s went through.

The first three games had much broader themes inlaid in them than Mask of the Lunar Eclipse does. Who’s close to their siblings and would face any danger for them? Who’s got an incident in their past when they hurt someone and have never been able to let it go? Who’s lost a loved one and mourned? Even broader than that, who’s ever felt love or guilt? I’m going to say roughly everybody on Earth! Your situations didn’t lead you to a haunted house like the protagonists of the series but you’ve felt the same things that they have. Now hands up for anyone who has ever been locked away in a sanatorium because of a moon related disease and was then kidnapped to perform in a supernatural dance ceremony that you were then rescued from and lost every, single memory from your childhood? No one? Really? Let’s go a little deeper then. Who’s ever lost their memory? Who’s been kidnapped? Who’s willing to die for self-discovery? Still not a lot of people. Can we go deeper still? No, not really. Everything in Mask of the Lunar Eclipse is very shallow. It’s a cool story but there’s nothing underneath it that links it to its players.

Am I looking too deeply? It seems that there’s everything we need to make a successful Fatal Frame story here: weird rituals, angry ghosts, the Camera Obscura, female protagonists, fetch quests: it’s all been in the past games and it’s all here now. But there’s just something that doesn’t sit right with me about Mask of the Lunar Eclipse. It’s time to address the elephant in the room.

Nintendo. The Wii. Motion controllers. What a bizarre place for an M-rated survival horror series to go. As far as motion controls go, I hate them. I shake too much, I’m impatient, and I don’t want to flail around like an idiot when I’m trying to game. The Wii is super if you want to bowl or semi-accurately swing a sword but a horror game like Fatal Frame requires something a bit subtler I feel.

The nunchuck moves the character around while you look around with the Wii remote which in game is your flashlight. It’s kind of neat having the flashlight be an actual tool you can use instead of just a prop in your hands. It even encourages you to look around your surroundings to find things like film and herbal medicine as they don’t become illuminated until you shine your flashlight on them. I’ve just never enjoyed the one joystick approach of the Wii though, often feeling clumsy with it and acutely aware that I’m playing a videogame. Having an awkward controller/controls will take you out of the game play experience almost as fast as frame rate issues.

The move from PlayStation to Wii not only took away the subtler controllers but also the subtler atmosphere. Gone are the fixed, cinematic angles, replaced with an over-the-shoulder camera that follows your every move. So there goes the tension that was built from not being able to control your camera. Then there’s the sound design, which is no doubt good for people playing a physical copy in Japan, but for the rest of the world that’s had to hack it, it’s a stuttering mess for about half the game. Some goes for the frame rate if there’s more than one person on the screen. Which is every fight with a ghost. Frame rate issues. Every time. A ghost. Is on screen. I’m going to have to go full white girl here with an adamant I CAN’T EVEN!

The location is creepy enough as you wander the tight, turning halls of an abandoned sanatorium but, much like the characters, it all looks the damn same! The appeal rubs off fairly quickly. For so much of the game you’re stuck wandering around the sanatorium through rooms and hallways that are all the same because it’s a hospital and they’re usually pretty uniform. Good for the infrastructure of healthcare but horrible for a varied videogame. The colours are gone too, the whole game covered in shades of greys and browns. I get it, it’s a horror game, we need darkness and shadows to be spooked, but just because there are ghosts roaming around doesn’t mean we can’t get some splashes of colour. Crimson Butterfly had the red butterflies, The Tormented had the blue snake and holly tattoos. Apparently Mask of the Lunar Eclipse has yellow as its motif colour to bring to mind the look of a full moon on a dark sky, but I didn’t see it anywhere.

This retrospective is going on longer than I thought it would. Honestly, I’m baffled. I don’t have that strong a feeling towards Mask of the Lunar Eclipse. Besides the character costumes which is more of a critique on the series as a whole than just this one game, there’s nothing I full on hate about this game. It’s more of a ‘meh’ feeling I get from this game. It’s decent, albeit very different from what I’m used to with Fatal Frame. The worst thing about Mask of the Lunar Eclipse–the absolute worst thing–is that Nintendo bought it. Nintendo bought the rights to new Fatal Frame games and then neglected the property. They handed it out to whoever would make it, okayed a buggy game that they couldn’t patch, and then limited it to Japan only because of this.

So on the frustration-to-story scale, where does the fourth game in the Fatal Frame pentalogy lie? Game play is the same with the camera and ghosts but is now motion controlled. The story is decent on the surface but digging deeper reveals how little substance there is. A brief glance at the characters reveals their total lack of substance no digging required. It’s a series that was crafted lovingly by its mother company and then sold off to be replicated by another company that just doesn’t quite get it. They added in a few neat things here and there but couldn’t repeat anything that originally made the game so great.

So skip Fatal Frame 4: Mask of the Lunar Eclipse. Get a Luna Sedata Syndrome shot at the pharmacy and quarantine yourself if symptoms arise. We’ve survived three nights in Himuro Mansion, the Twin Deities of the Lost Village, the Tattoo Curse of the Manor of Sleep, and are just plain smart enough to keep the hell away from Rougetsu Island all together. We’ve got one more place to explore: Mt. Hikami. Pack your hiking boots; it’s no doubt going to be an uphill battle with the second Nintendo Fatal Frame title. 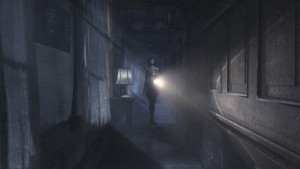