The Road to Hellcat… 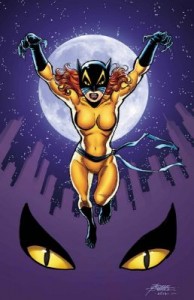 …is paved with a lot of good comic books!

A brief history of Patsy Walker (a.k.a. Hellcat) by Bob Reyer

With the second issue of the new Hellcat series by writer Kate Leth and artist Brittney Williams due on shelves this week, I thought, just in case some of you out there were looking into the life and times of Patsy Walker,  that I should re-cast the information from my “Hellcat History Lesson” as broadcast on our Talking Comics issue #215 into a more-easily scanned format…

(Robert, I believe that your editrix, that charming Ms. Cooke, would call what you’re writing a “listicle”, and if you had used that term, you could have saved yourself some typing time on that first paragraph, darling. @udrey)

As usual, Audrey, you’re much more fashion-forward than I, as that phrase has escaped my notice until you just now brought it up! So, without further ado, here’s my first official “listicle”, which will lay out some of the high (and low) points of the more-than 70 years of comics featuring Patricia “Patsy” Walker. 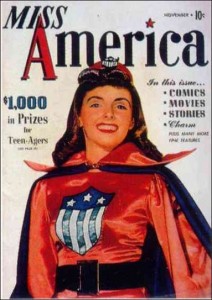 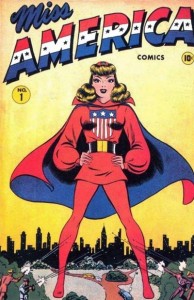 MISS AMERICA MAGAZINE #2 (NOV. 1944) Patsy Walker would make her debut in this magazine-sized second issue of the comic that top-lined the Madeline Joyce/Miss America character! Ms. Walker was co-created and drawn by pioneering artist Ruth Atkinson, with either Stan Lee, Otto Binder, or Al Jaffee contributing. (This issue would also feature the debut of her friend Hedy Wolfe and beau Buzz Baxter.) 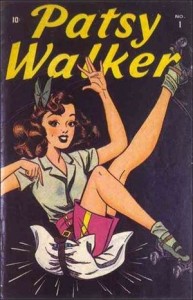 just a few months later! This title would run for 124 issues, lasting until 1965.

PATSY AND HEDY #1 (FEB. 1952) Ms. Walker’s partner in shenanigans Hedy Wolfe would share this second “Patsy” title, which would also settle in for its own long run that would end in 1967. 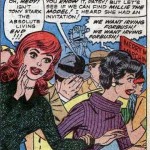 become part of the “regular” Marvel Universe, as Stan Lee & Jack Kirby place the girls in a featured cameo as super-hero fans scoping out the “Who’s Who?” of guests entering the Baxter Building for the wedding of Susan Storm and Reed Richards–a social event that you can read about here!

AMAZING ADVENTURES #13 (JULY 1972) In this series starring The Beast, writer Steve Englehart (spurred by FF Annual #3!) would bring Patsy and her (for) now-husband Buzz Baxter directly into the mainstream Marvel Universe, as Patsy gets involved in keeping Hank McCoy’s secret identity from the authorities at Brand Corporation , including her prying hubby! Mr. Englehart would find Ms. Walker to be irresistible, as he would take her character to another level in the series cited next!

AVENGERS #141 (NOV. 1975) Patsy, now divorced, shows up at Avengers Mansion with news of some shady doings at Brand Corp. while also seeking to have Hank make good on a promise to help her participate in the adventure. This comes to a head in.. 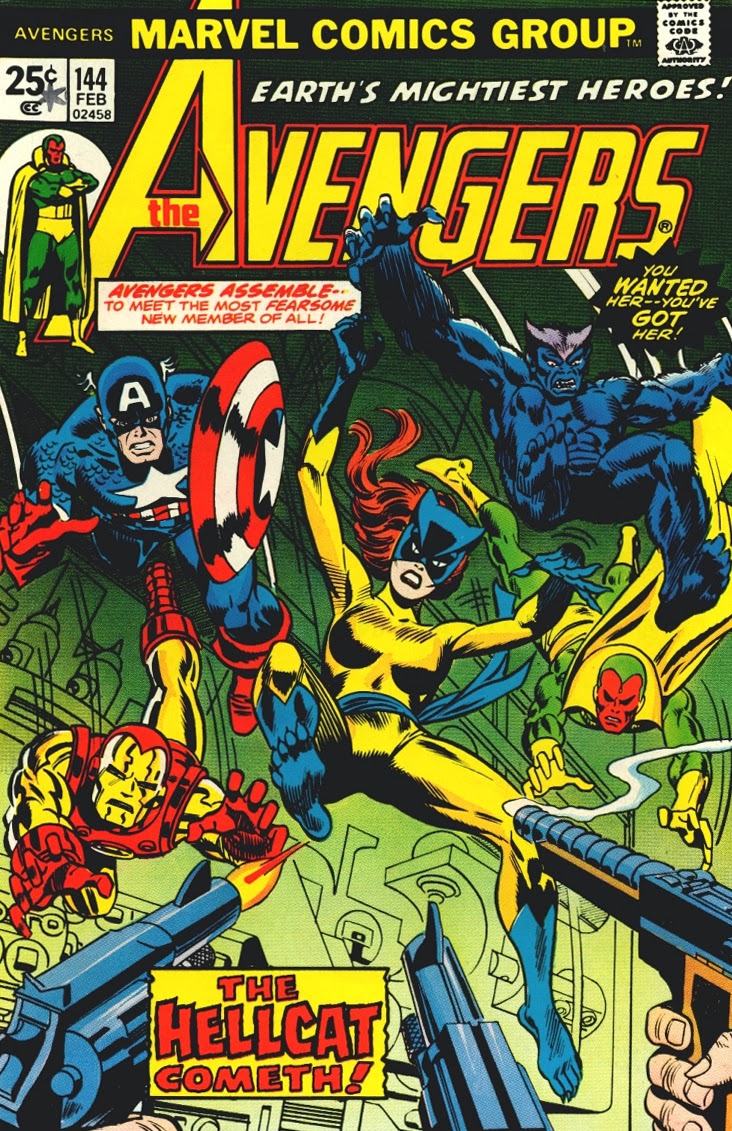 AVENGERS #144 (FEB. 1976) In a jam, with super-villains and corporate baddies everywhere 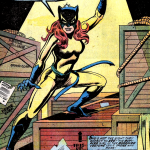 , The Avengers turn to an unexpected source to help in their escape, as the team discovers the super-suit once belonging to The Cat (Greer Nelson, now Tigra), and when Patsy Walker dons it, she becomes, from there forward, Hellcat! (Patsy and Greer would meet in 1987’s West Coast Avengers #14–#16, also written by Steve Englehart.)

AVENGERS #151 (SEPT. 1976) At the conclusion of the previous adventure, The Avengers are retooling their roster (again), and Iron Man offers Patsy a spot on the team. She’s all set to accept, too, when the Princess of Titan, Moondragon, offers to train her in the proper use of her abilities, so off they go into space–but Patsy will be back, and quite quickly!

DEFENDERS #44 (FEB. 1977) Patsy Walker returns to Earth with a warning for Dr. Strange about some mystic danger afoot, and by issue #46, she’s replaced him in the group!

DEFENDERS #92 (FEB. 1981) Damon Hellstrom (The Son of Satan) comes into Patsy’s life, and though he’s charming, a gal as savvy as she is should have seen trouble coming a mile away, if only from his name!

NEW DEFENDERS #125 (NOV. 1983) “Patsy, don’t marry that guy–at least ask to see his birth certificate!” The wedding of Patsy Walker and Damon Helstrom is crashed by her ex-husband Buzz, who is now the super-villain known as Mad Dog!

HELLSTORM, PRINCE OF LIES #14 (MAY 1994) In what is most certainly the low point of her existence, having been driven mad by Damon, Patsy Walker takes her own life! (It’s comics though, so don’t be too sad.) 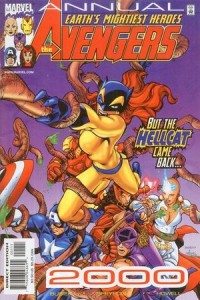 travels to Hell itself to rescue Mockingbird, but due to the machinations of Damon Hellstrom, Clint mistakenly returns to Earth with the resurrected Hellcat instead!

HELLCAT #1–#3 (SEPT. 2000) Steve Englehart would craft this tale of the newly-reborn Hellcat, who’s acquired some new skills whilst she was…”away”.

PATSY WALKER, HELLCAT #1–#5 (SEPT. 2008) Hellcat is “drafted” into the super-hero Initiative, and goes off to defend Alaska in this 5 issue mini-series by Kathryn Immonen and David LaFuente.

MARVEL DIVAS #1–#4 (SEPT. 2009) For what my opinion is worth, you might want to pass on this Marvel-ized “Sex and the City” knock-off, and instead go looking for the following…

HERALDS #1–#5 (AUG. 2010) This mini by Kathryn Immonen was released during the “Women of Marvel” promotion, and it features some of the company’s best super-heroines battling to save the Earth from cosmic menaces.

SHE-HULK vol. 3 #2 (MARCH 2014) Patsy turns up in Brooklyn as Jennifer Walters crack investigator…and occasional super-heroic partner. Which brings us to… 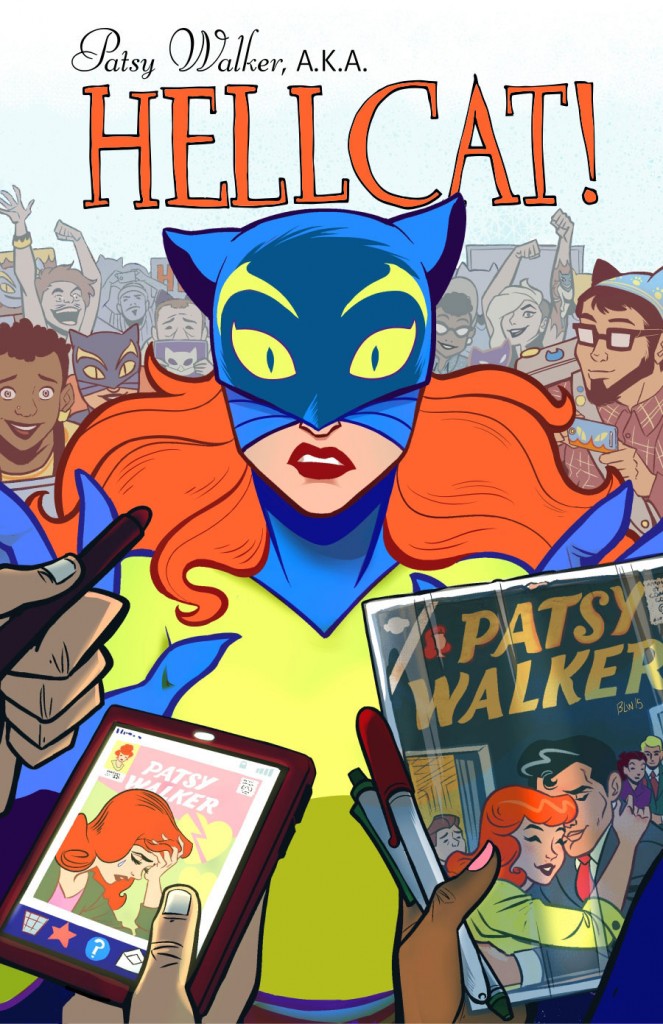 PATSY WALKER, a.k.a. HELLCAT #1 (DEC. 2015) The new series by Kate Leth and Brittney Williams is off to a great start, which I’m sure you’ve already found out for yourself, or you probably wouldn’t be reading this!

It seems as if I’ve run out of space!  I hope that you’ll dive into some of the stories highlighted here, as the “Happy-Go-Lucky” Hellcat has had one of the most varied histories on the Marvel Comics stage, and you’re sure to have a great time.

ADDENDUM: “Cheese and crackers!” as Patsy used to exclaim, there’s a bit of meta-stuff that I wanted to add but wasn’t sure where, and then I forgot entirely! On the Netflix TV series “Jessica Jones”, she was a child star whose Mother dominated her career; in the books, it was revealed in Defenders #89 that her Mom had written comics stories about “Patsy Walker” for the Marvel Universe version of Marvel Comics!