THE WEDDING OF SUE STORM AND REED RICHARDS

In honor of Saint Valentine, let’s take a loving look back at the super-hero social event of 1965, the wedding of Sue Storm and Reed Richards in that Summer’s Fantastic Four Annual #3.  Of course,  no wedding ceremony goes off exactly as designed, and in this case, the “unscheduled entertainment” was virtually every villain the Fantastic Four had encountered to that point in their career. The Richards’ event planner was clearly prepared for something to have gone awry, as Nick Fury and his agents of S.H.I.E.L.D. were on hand for security, since the engagement party had seen an attack by the Frightful Four…but I’m getting ahead of myself a bit; let’s take a step back, and see how we got here!

In Fantastic Four #1,  Sue declares herself engaged to Reed, as on the way to their fateful space voyage she remarks “Don’t say it, Reed! I’m your fiancee! Where you go, I go!”, but in Stan Lee’s original synopsis for that first issue, he described her as Reed’s “girlfriend”, and for the most part this is how she is depicted throughout the team’s early adventures, as Sue waited for Reed to fully commit to their relationship. Their possible future together is thrown into a tizzy when the Sub–Mariner re-appears in  issue #4 and finds Sue so beguiling that he offers to stay his destruction of the surface world, if Sue Storm will consent to be his bride! She agrees to this in order to save humanity, but this “sacrifice” just angers Prince Namor, and after a brief struggle with her enraged team-mates, he escapes, vowing to return.

Over the next year or so, Namor would make his presence felt many times in the Fantastic Four, usually with a plot to convince Sue to become his Princess, and she did evidence feelings for him (and even kept a photo of him around in #6!), but by issue #27 (“The Search for the Sub-Mariner”) Sue tells Namor “I’m sorry if you misunderstood the sympathy I felt for you, even the affection I felt. Sorry if you though it was love. But I realize now…Reed is the only man for me, nothing can change that.” At the close of issue #33’s “Side by Side with the Sub-Mariner”, Reed finally understands that Sue doesn’t love Prince Namor, and having nearly lost her due to injuries sustained fighting the Mole Man, he decides to act. During a visit to State University (his alma mater), and standing in front of the “Sweetheart Tree”, Reed Richards tells Susan Storm “According to tradition, any couple who holds hands and kiss while standing before it will marry within a year”, prompting this exchange:

Sue: I’ve been waiting…for you to…take my hand.

Reed: Sue, my dearest! You mean–? You feel about me the way that I feel about you?

(I’m getting verklempt, and it’s a story from almost 50 years ago!)

As I said previously, their engagement party in the next issue was crashed by the Frightful Four of the Wizard, Sandman, Trapster and the newly-introduced Medusa (not to mention the non-invited Spider-Man, who *thwipped* some cake!), so in Fantastic Four Annual #3 (which falls between issues #43 and #44), that the nuptuals should become a super-hero vs. super-villain free-for-all wasn’t surprising, nor was the force behind it. We open on a newspaper headline screaming “TODAY’S THE DAY! WEDDING BELLS FOR REED AND SUE!”, which is instantly ripped to shreds by the armored hands of Doctor Doom! Deciding that transforming “their wedding day into the day of their final destruction” is his “greatest chance for revenge…”, he sets out via his “High Frequency Emotion Charger” to manipulate evil-doers into mounting a siege of the ceremonies. Once the attacks by the likes of the Red Ghost, the Mad Thinker, Super Skrull, the Mandarin, and even the undersea hordes of Attuma begin, the Richards’ guests try to restore order, and considering that they include Dr. Strange, Daredevil, the X-Men, and the Avengers, it makes for quite a cocktail hour! Eventually, the Watcher offers his aid in clearing the room to allow Sue and Reed to exchange their vows before an assemblage of  Earth’s mightiest heroes… 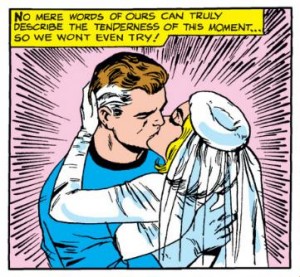 (However, there are two more gate-crashers who are shown the door by Nick Fury, but they vow revenge…as only Stan Lee and Jack Kirby can deliver it!)

Sue and Reed wouldn’t get a “proper” honeymoon, as over the next few years the aforementioned gentlemen set them on a course of adventure to strange worlds and other dimensions. More importantly though, Stan and Jack worked at the notion of having their leads a loving married couple, which brought the series a human element not seen in super-hero comics previously, and which would culminate in the birth of Franklin Benjamin Richards in1968’s Fantastic Four Annual #6…which I’m sure that I’ll review just in time for Mother’s Day!

ADDENDUM: There was a wonderful Fantastic Four 40th Wedding Anniversary Special that featured a touching story called “The Life Fantastic”  by writer Karl Kesel and artist Drew Johnson that allows us to peek in at the most “fantastic” anniversary party ever…’nuff said!  rrr

Soundtrack: Parts of this were written whilst listening to the Four Tops’ 1968 album “Yesterday’s Dreams”, which includes the song “The Sweetheart Tree”, and the conclusion was created embracing the Irving Berlin evergreen “Always” (as sung by Sarah Vaughn and Billy Eckstine), which features the lines: “Not for just an hour…not for just a day…not for just a year…but always…”  which is one of my favorite songs…

(Sorry Gentle Readers, but Robert seems to have gotten something in his eye, and won’t be able to continue.  Audrey)