Doctor Crowe #1 is a four story Pulp Horror anthology from 215 Ink chronicling the crazy adventures of the mysterious Doctor Crowe. Written and created by independent comic book freshman Corey Fryia, Doctor Crowe is a fantastic first outing with promise of a wonderful future.

This first issue takes the reader on four separate adventures that really introduce you to who Doctor Crowe is. No pun intended, but Doctor Crowe really reminds me a lot of the Doctor from Doctor Who. With his trusty crossbow and his partner Nora, he takes on some of the most evil and powerful monsters. His crazy confidence and knowledge of these monsters is captivating and wonderful to read.

In the first stor 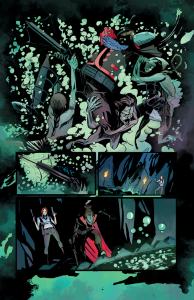 y entitled Beneath the Black, Doctor Crowe and Nora venture through a cave only to be attacked by soul devouring bogmen. But not to fear, this terrific tandem takes on the powerful Queen with no fear for their own lives. However, the only way to defeat the evil Queen is to remove her red glowing eye. Can they do it?

In story number two entitled Wretched, Doctor Crowe goes on a solo mission to a small town where a virus outbreak has everyone going crazy. What he doesn’t know until he gets there, is that this virus is actually turning people into boil infested werewolves. Does he have the strength to face this monster alone?

Story number three entitled The Lost Coven has Doctor Crowe bleeding
out in the woods with a knife in his shoulder. When a stranger finds him there, he tells the story of how he was attacked by three witches and barely made it out alive. But things go south when this stranger isn’t who he appears to be.

The fourth and final story entitled Dreamwaker finds Doctor Crowe reunited with Nora for a crazy adventure through the dream world filled with monsters and dream eaters. And the only way to save a troubled boy is for Doctor Crowe to venture into this dream world and face these dream eaters head on. How will he do it and can he save this young boy?

The Verdict? Get it when it’s out!
Overall this is a very strong first effort from Corey Fryia and the gang. Fryia does a phenomenal job of putting a whole comics worth of excitement and adventure into these 5 or 6 page mini stories. I was extremely impressed with how every mini story has a complete beginning, middle and end, leaving you satisfied and wanting more. The artists that Fryia found for this book are also fantastic. Each artist brings their own flair to the character while still managing to feel fluid and consistent. To follow all of Corey’s progress and to stay up to date with all of the Doctor Crowe news, follow his Kickstarter page.