While July gave us the ending of Princess Leia and the start of Lando and September promises Shattered Empire and a slew of novels, the month of August is somewhat uneventful in terms of Star Wars releases. Not to worry, though, the quality of the stories published has added wonderful layers to the new canon. Let’s take a look! 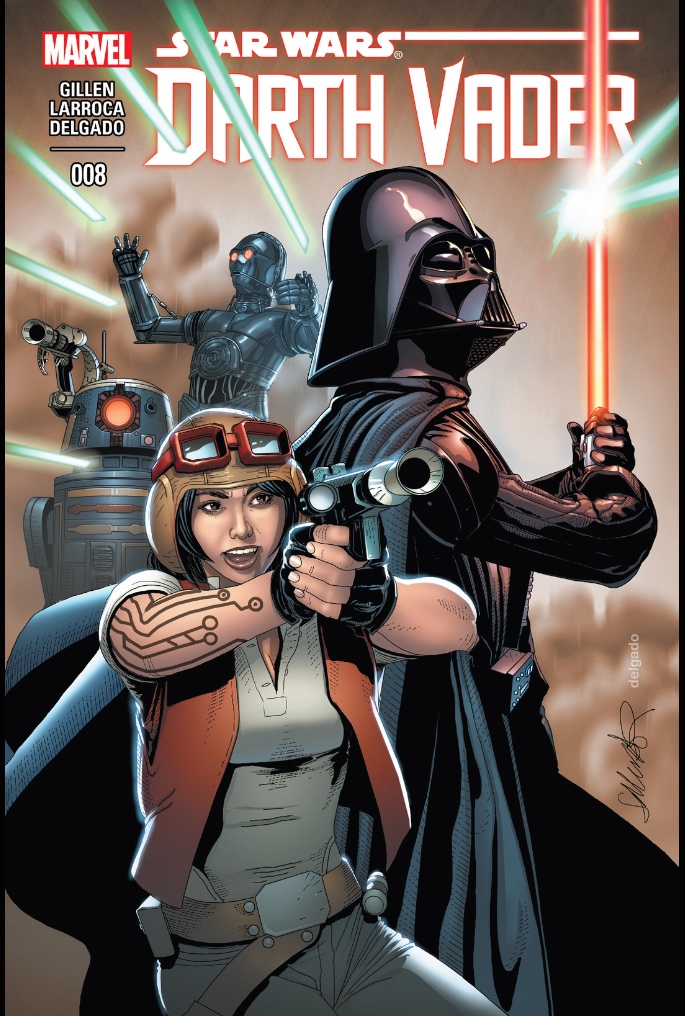 Kicking off the month is our resident Dark Lord. In issue 7, Aphra assembled a team of bounty hunters to perform a heist on an Imperial Star Destroyer. Our story opens up with that heist. With the help of some familiar faces (Krrsantan and Bossk), Aphra commits a massive heist that leaves the Empire a little short on funds.

One of the factors leading up to Aphra’s actions was her loyalty. Those who work for the Empire do not last long as seen in Empire Strikes Back. Aphra’s days are numbered, and it makes sense for her to find an escape route. However, Aphra’s motivation isn’t self-centered. She is, for all she’s worth, committed to Vader’s wishes.

That’s right – Aphra helped Vader steal from the Empire for his own means. With a droid factory, bounty hunters, and credits in his pocket, it is obvious that Vader has some extensive plan in mind.

The Empire continues to rely on forces other than Vader to suppress Rebel activity. Gillen is making a point in this comic that Vader will be continuously blamed for the Death Star until he makes it up one way or another. Between his personal mission and the Cylos, Vader’s career track is looking pretty grim.

Oh, and the introduction of Inspector Thanoth isn’t helping Vader get back in the Emperor’s good graces. 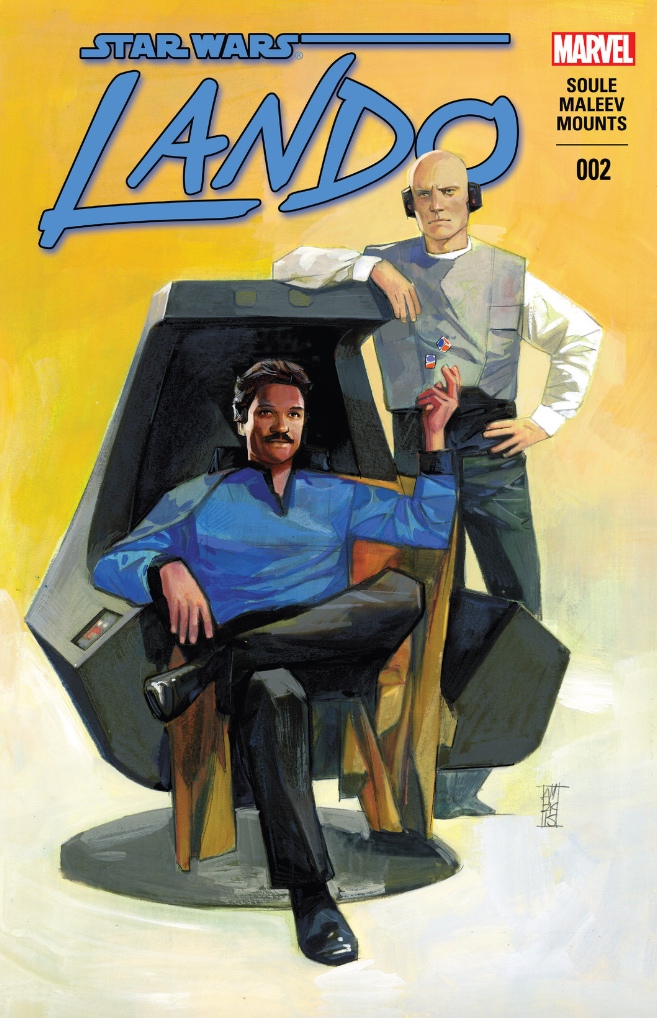 Yeah, so I personally did not like the first issue of this series. I didn’t like the pacing, the story, the heavy dialogue…BUT this month’s additions make up for it. Seriously, I’m starting to enjoy Lando.

Soon after stealing the pleasure craft, Lando is pursued by Imperial Star Destroyers. He handles the ship like a champ, dodging tractor beams and utilizing on-ship defenses. It’s no wonder the ship flies like a dream; it is the personal yacht of Emperor Palpatine, the Imperialis.

Does Lando balk at this new information? Does he suddenly flip out and think of how to right his wrongs? Nope.

Dude continues to fly off with the ship, choosing to live off the thrill of adventure.

The Empire is not sitting on its laurels as Lando makes off with the ship. The Emperor himself contacts Chanath Cha, a bounty hunter/mercenary of sorts who is extremely deadly. Cha presents as a true threat, the one person who can hunt down Lando. The addition of Cha to the comic will also make for a better heist story than Lando v Empire.

Lando does give us a great behind-the-scenes look at one of my favorite things about the Empire: the constant turn in personnel. The higher you climb in the Imperial forces, the quicker you fall. It was present in this month’s Darth Vader, and it’s on the panel in Lando #2.

Besides the loss of face due to the stolen ship, Palpatine has a greater need for the yacht to be returned. It is filled with priceless artifacts – more on that at the end of this column when we talk about Lando #3. 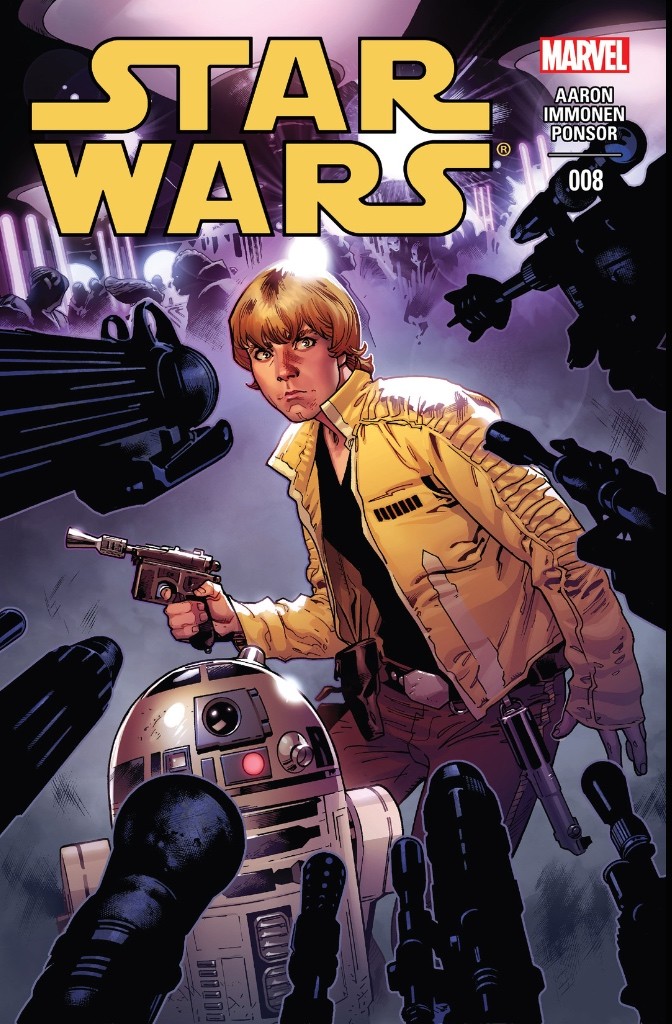 The Star Wars universe’s flagship comic kicks off with a new artist and a new arc. I’m dubbing this arc the Sick of Your Crap arc. Let me explain.

First, Leia is sick of Han’s crap. He attempts to wine and dine her on his personal hideaway only to be thwarted by his…wife. Now, we are still unsure of the relationship between Sana Solo and Han Solo. She claims to be Han’s wife. He adamantly denies it. She notes that Han has pulled the Rick Girl con before; Han denies it. She wants to take Leia in for the bounty; he tries to talk her out. Whatever, Leia is Sick of Your Crap.

You know who else is Sick of Your Crap? Luke Skywalker. Specifically, he’s sick of Obi-Wan’s stories. After going back to Tattooine and risking his life at Ben’s hermit hole, Luke is disappointed to find out that the journal he salvaged is nothing more than a personal account. No Jedi secrets, no helpful hints. Luke starts to take things into his own hands in the most risky, teenager fashion: show off in a bar. Of course, it doesn’t quite work out for him when he gets his lightsaber stolen.

This issue leaves the Skywalker twins primed and ready to take control of their situations. They’ve been pushed too far, and they are both going to shake things up in their personal lives. 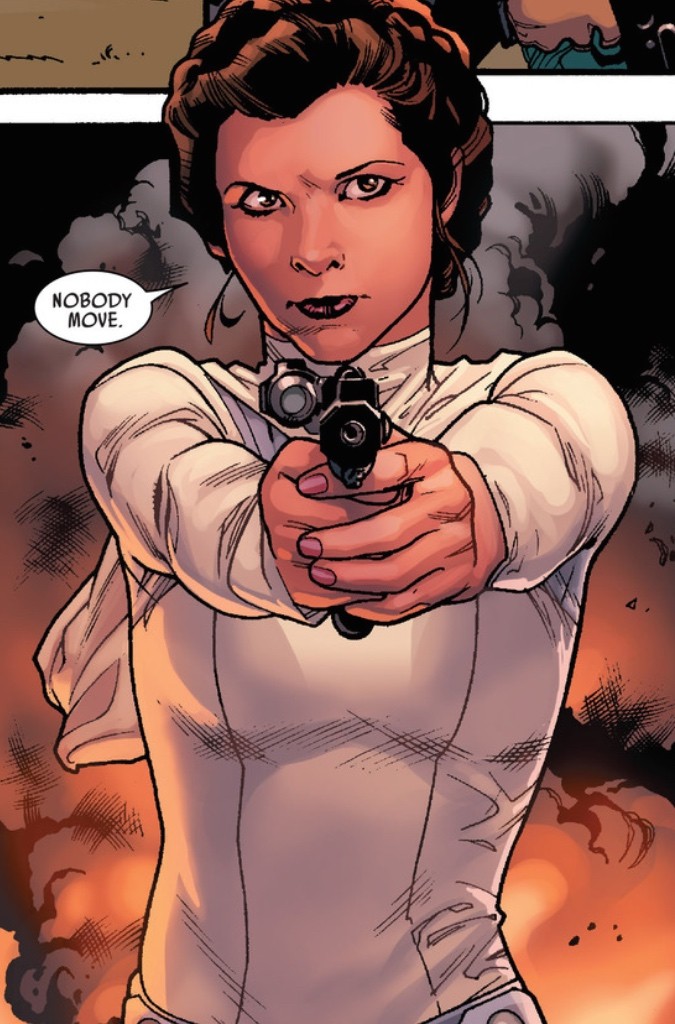 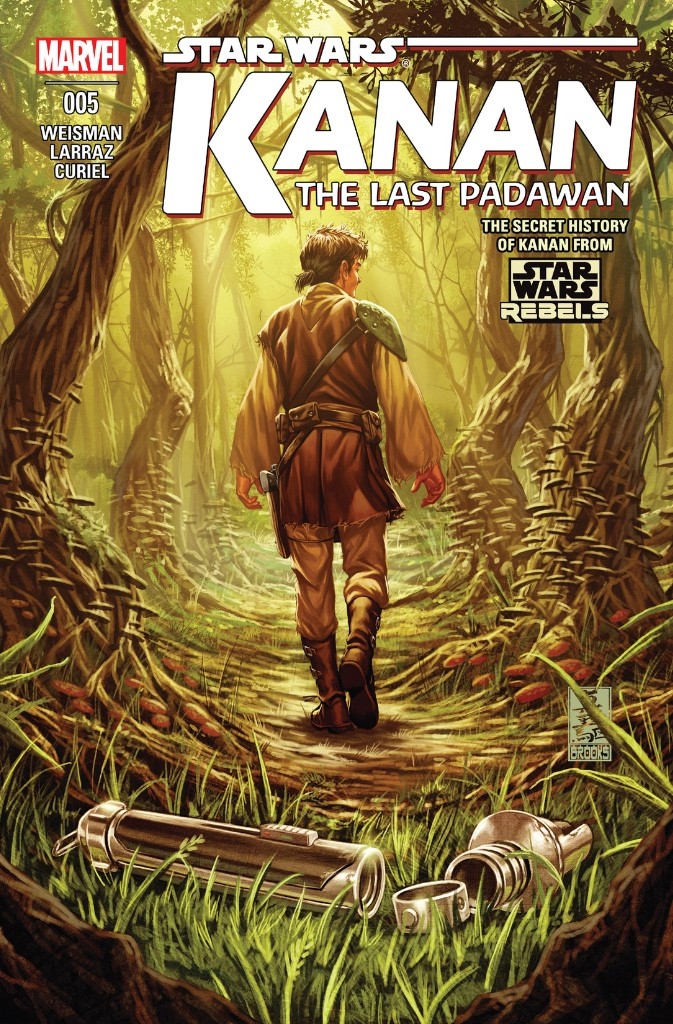 *Sniff* Our little Caleb Dume is all grown up. The child that started this series is buried deep in the young man we see in issue #5. This transformation was much needed; Caleb needed to learn how to survive in his Jedi-less world without relying on the Force.

Caleb has planted the seed of dissonance in the Troopers’ minds. On his knees, his hands bound behind his back, Caleb reminds them of the Republic they once served together. The Troopers undergo what I can only explain as a glitch, an event that doesn’t match up with their programming. They’ve followed their orders, but their orders do not coincide with their mission. They’ve turned on their general, the ultimate form of treason.

What Caleb said must have sunk into Grey’s mind. He cannot reconcile his actions. His redemption lies in “making it right” and giving Caleb Dume a shot at living in a new world.

In this issue, Caleb Dume is put to rest. He leaves Janus Kasmir to live on his own as Kanan Jarrus. He has proven his worth as a street-smart young man, one who values others and lives by his own code.

As an arc, these first five issues were incredibly well paced and balanced. I’ve said it before and I’ll say it again: Kanan: The Last Padawan is the strongest Star Wars comic of the bunch. I’m hoping future issues will continue to be just as strong as this first arc. With that being said, Kanan from Star Wars Rebels will be gracing the pages of this comic. Here’s hoping for more of my girl Hera! 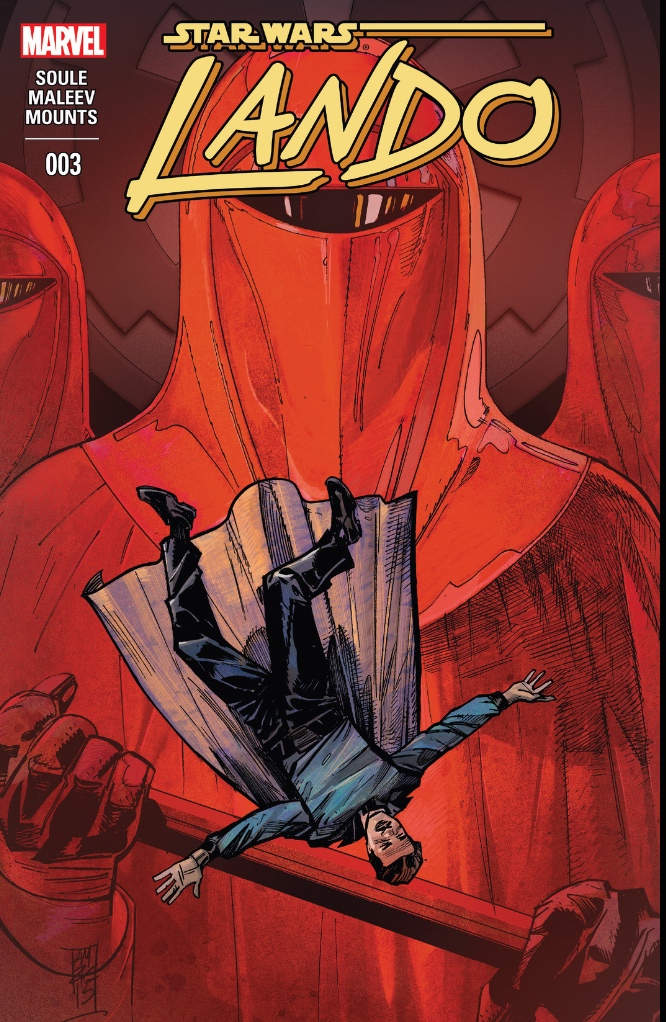 Double the Lando this month! Earlier, we left off with Lobot being assaulted by the Imperial Guard on Palpatine’s personal yacht, the Imperialis. Things aren’t looking too good. Lobot’s implants are taking over his failing body, and it’s up to Lando to get his closest friend and ally into a bacta tank.

Ah, the wonders of the bacta tank. Anyone who invents a bacta tank in our galaxy will surely change the medical field forever. Also, it’s nice knowing that a deus ex machina of that caliber exists in the Star Wars Universe.

The Imperial Guards have their hands full with the twins, Aleksin and Pavol. Strangely quiet and extremely deadly, the twins make quick work of the Guards. The panels are action-packed and have a humorous moment as Aleksin and Pavol share their joy mid-battle.

So, what exactly were they guarding? Only Palpatine’s personal collection of Sith artifacts. I’m excited to see what they utilize from the Legends Universe when the crew starts to explore this haunting room, especially since we know Darth Bane is part of the canon thanks to a Star Wars Clone Wars episode.