The second of Marvel’s new Star Wars titles to arrive on shelves, Darth Vader #1 makes its allegiance clear from the outset. “It is a period of insurgence,” the introductory text reads. “Chaos looms!” 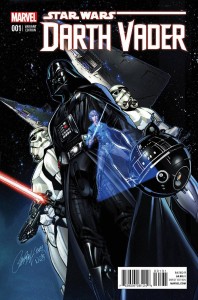 The action picks up shortly after the events of Jason Aaron’s Star Wars #1 and 2. While Aaron’s book focuses on the narrative of the rebel heroes taking on the Empire, Kieron Gillen’s book deals with the decidedly less glamorous administrative fall-out of the catastrophic loss of the Death Star. It’s an interesting place to begin for Darth Vader, with a figure that looms so large in the public imagination in a place where he has been humiliated and diminished.

Gillen has long been Marvel’s go-to guy for writing villains, and he shows why in this book. His Vader is compelling and even sympathetic – who can’t relate to suffering an embarrassing dressing-down for a mistake by their boss, or worrying about being supplanted by a rival at work? The Vader of this book has something to prove, and he’ll work outside the system to do so if he has to. In the pages, we catch glimpses of the reckless boy whose anger and hurt turned him to the dark side. Just when the reader may be empathizing too much with him, however, Gillen gives us a moment like the final page of the issue that reminds us who Vader truly is, and what he is capable of.

Gillen gets that the reason Vader has become such an iconic figure is his impenetrability – the black cloak and opaque mask. He doesn’t clutter the page with narration, telling us what Vader is thinking. Instead, he lets the silences stretch over the page, making it all the more effective and chilling when Vader does speak and give us a window into his mind. The artwork by Salvador Larroca is a faithful, photorealistic rendering of the characters fans of the movies have come to know and love. A scene where Vader remembered his old master Obi-Wan was given a particular poignancy by the artwork.

Verdict: BUY. Kieron Gillen and Darth Vader are a perfect match. The $4.99 price point, I’ll admit, may give some pause, but if you’re a fan of the Star Wars universe you won’t want to miss this chapter in the story of one of the saga’s most compelling characters.