One of the things that makes me happy to work with someone like Nick here on Talking Movies is that he is constantly challenging me, making me question what I watch, how I process it and taking other views into consideration when postulating about whatever we’re tackling that particular week.

He’s also a miserable son of a bitch.

You see, when we took on the Top 50 prospect, Nick met it with the same wild abandon that I had thrown it at him with – wide-eyed, energetic, anxious, excited – all the things that I felt myself. However, approximately 14-16 hours since I had posited the notion to him he declared “I think my list is done!” – I knew that I had overstepped my bounds.

You see, part of what I love about movies – or more rightly, what I love about loving movies – is the accumulation of knowledge. Part of that is the notches on the bedpost, if you will. The sheer number of how many movies I see makes me feel like I know more and understand more about movies, and to be frank, helps boost my ego about being a movie lover. Talking Comics’ Bobby Shortle and I used to joke that certain movies were just seen to “pad the stats,” so we could run our respective movies-seen-in-a-year list up to the triple digits.

I have also tried, many times and never successfully, to compose a list of everything I have ever seen. This is extensive, of course, but also embarrassing – I have a list of 500+ films that I haven’t seen, and it keeps growing. What’s on there, you ask? A Clockwork Orange. Trainspotting. Close Encounters of the Third Kind. The Seven Samurai. It’s bad. But it’s also great, right? A seemingly never-ending trove of treasures to uncover?

Well, back to the task at hand. If I wanted to determine what my top 50 movies of all time were, I have to work from a comprehensive list, right? I wouldn’t want to forget something. My collection isn’t very impressive, as I’ve taken to more and more digital copies of films as well as just utilizing the brilliance that is canistream.it for impulsive hankerings. My father, for instance, would be able to just graze across his fertile field of Blu-rays, DVDs, HD-DVDs (not kidding), LaserDiscs and Super 8mm to find his top 50. He wouldn’t have to look any further than his living room.

Not I. I was pretty certain that there’s nothing before 1930 that would be on my list. (Do I love Steamboat Bill Jr.? Sure. The Iron Mask is pretty awesome. And I hate The Cabinet of Dr. Caligari. So there’s that.) So, I started using the wonderful world of Wikipedia to form a shortlist. I started with the entry “1930 in film,” and just started reading every release. If something struck my fancy, as a “yeah, that could totally be on a top 50,” I jotted it down. This continued to 1931. And 1932. You get the picture.

It was so interesting to see where my tastes landed. Here’s a crude pie graph showing the breakdown of my shortlist, which 188 movies long. 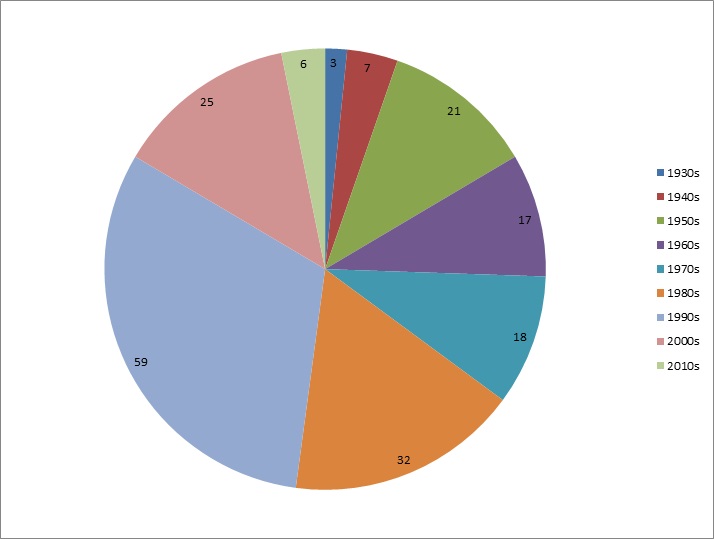 This is pretty crazy, right? I’ve been seeing all sorts of movies my whole life, but apparently the 1990s – my heyday of adolescence and growing up – has the most entries by far. Who knew, huh? Breaking it down even further, 1994 had eleven possibilities and 1995 had ten. Were we making better movies in 1994 and 1995? Probably not. It’s just that nostalgia has such an effect on how we view our experiences that when we’re at our most porous – those twinkling tween years – we absorb more.

Another important aspect to crafting the list was getting rid of this notion that “favorite” is different than “best,” or that a movie can be “a great movie” but not “something I like.” To once again paraphrase the always quotable Bobby Shortle (that guy should start a website or something – seriously!), our own experiences are all we have. Sure, I say this on the podcast, but I can’t stress it enough. There is no such thing as objectivity when it comes to “liking” movies. Of course I can recognize that the cinematography in The Thin Red Line is beautiful, but that movie is fucking boring. The apparently-gorgeous shot composition didn’t do anything to heighten my experience, and that’s all that matters – right?

So that’s why a lot of entries into the shortlist – and ultimately the list proper – come from a place where I was doing the most I could to discover film. Maybe the bar is higher now than it once was, and that’s why the later years don’t affect me as earnestly as older ones do. Who knows?

All I know is that since Nick had written such a well-composed, fun and insightful piece for us a few days ago I had to try and outdo him. As is often (always?) the case, I’ve failed miserably – but that doesn’t mean I’ll stop trying.