It has been a long long time, almost two years, since the last issue of Danger Club.  Regardless, I was happy to see the series finally return to the shelf. Due to an error on Comixology’s website I initially thought it was the final issue. I tweeted this out and writer Landry Q. Walker was quick to reply that there was a mistake, and there would be two more issues after issue #6. That was some good news to hear, and I hope the remaining issues do not suffer any major delays. 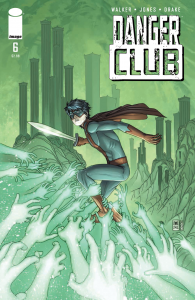 After reading through Danger Club #6 it was pretty clear I had forgotten a lot of the details of the events that had transpired. I was left pretty confused and I honestly couldn’t comment on whether or not the issue was good, bad, or somewhere in between, because I really did not have the context to make a sound judgment. If anyone has not read Danger Club before or you have not read this issue yet, then I would suggest going back and reading from the start.

Danger Club #6 is a pretty heavy issue that explains a lot of the back story of Kid Vigilante and why it is he always has plan. We have not seen Kid Vigilant since issue #4 when he got his brains blown out of his skull. Issue #6 shows us where he went after his death, sheds some light on his brother’s powers, and the Red Vengeance’s plans. Walker is providing us with a lot of explanations in this issue, so do not be surprised if you are a little confused (even if you have gone back and read the series again). I can see how the events in this issue overlap with the rest of the series, but I am not sure how exactly it lines up perfectly with everything else. Hopefully this is all resolved in the final two issues.

The art in this issue is much like the rest of the series and it is gorgeous. The colors are one of my favorite parts of the series, and I love Drake’s use of bold, bright colors. The story being told is a grim one, and things have gotten gritty. However, the colors reflect the way the world was before all the heroes went away. It is still the same world that was left behind, so just because the way it works has changed does not necessarily mean it would change visually. I believe some of the characters talk about it in one of the earlier issues when they mention how things look the same on the surface, but they in fact are not. I think that is why in the first issue when Kid Vigilante beats the daylights out of Apollo it is so shocking. If the colors had been subdued and a more solemn tone was presented, things would not have been as shocking as they were. The colors serve as a great way to juxtapose the current and past times.