For those of you that are all like, “Whaaaat?”, Disney Infinity is an action-adventure sandbox game featuring a parade of characters from popular Disney-brand properties and beyond. The first installment of the Inifinity franchise was released back in 2013, and had been met with rave reviews from both long-time fans of the House of Mouse, as well as the casual gaming community. Oh, what’s that? You don’t know what Disney Infinity is? Well, using a simple scanning device (called the Infinity Base), players are invited to enter characters, playsets, and various other features (through the use of power discs) into both prefabricated and player-created Disney-themed worlds. It’s all pretty genius, really.

Now, I’m positive that this will come as no surprise, but on September 23rd of 2014, a Marvel-themed sequel was unleashed. That’s right, folks, Disney 2.0! This time, Disney and Avalanche Games would like to welcome you to Avengers Tower – where you’ll get to play as Iron Man, Thor, and Black Widow! Okay, okay, calm down. Try deep, steady breaths. I SAID CALM DOWN! There, that’s better. Yes, there are a multitude of reasons why you should be excited about this game, though if I’m being completely honest here, I found 2.0 to be a bit of a mixed bag. 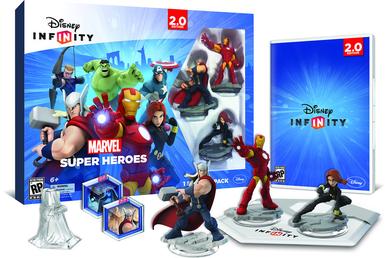 Here’s how it all shakes out for me. I very much enjoy the presentation of the Disney Infinity games. The time I  spent while exploring the world of Infinity was forever filled with bright colors, beautifully realized backdrops, and enough insider nods to make any Disney die-hard feel a bit like that over-excited priest from The Little Mermaid. Additionally, I love the figurines. In my time spent collecting them, I’ve found that the figures themselves are wonderfully crafted, and feel worthy of the price asked to own them. The way I see it is, not only am I purchasing an interactive game-piece, I’m now the owner of an in-expensive Disney collectible – and something that’s totally worthy of being casually displayed in my home. Now, that’s all well and good, but what about the game?

Here’s where things get dicey. You see, when I purchased the first Disney Infinity game back in 2013, the starter package included: the game, an Infinity Base, 3 figures, and 3 unique playset worlds that I could visit. That’s right, for $70 I enrolled at Monster’s University with James P. Sullivan, smashed giant robots with Mr. Incredible, and sailed the seven seas with Captain Jack Sparrow! That’s not too shabby, all things considered. Now let’s look at Disney Infinity 2.0., shall we? For that same $70 price tag, you get: the game, an Infinity Base, the Iron Man, Thor, and Black Widow figurines, in addition to 1 Avenger’s Tower playset.  At first glance the contents looks the same, but look again, you’ll find that you’re only receiving 1/3 of the content.  Yes, within weeks of the game’s release there were several playsets available for purchase the tune of $34.99, but c’mon. 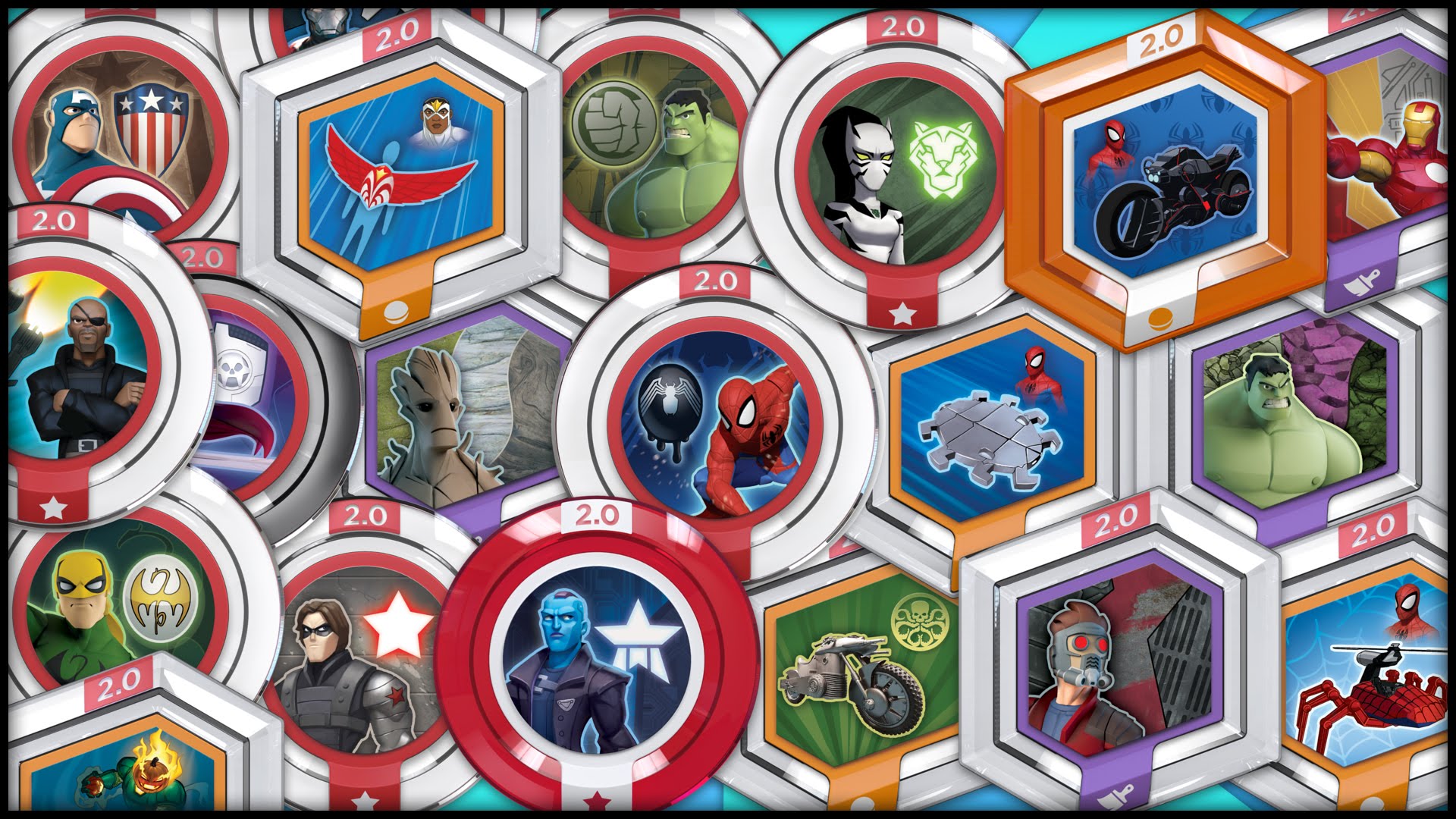 Moving on … Disney Infinity plays exactly like you’d expect, with players using the buttons available to them to jump, attack, and magic their way through the missions. Supplying you with mission briefs while saving the city from a rather nasty Frost Giant infestation, is either Nick Fury, Captain Marvel (Yay!), or Wasp. Oh, real quick, I want extend my personal kudos to Disney and Avalanche for the surprise inclusion of Captain Marvel as an NPC character. That’s some very forward thinking on your part and I can’t wait for you all to release a figure of her in the future. You are doing that, right? You’d better. Also, a sweet addition to 2.0 is the inclusion of an expanded skill tree – which allows players to unlock new and exciting abilities as they progress further along the scripted adventure. I found that by expanding the characters capabilities, Infinity 2.0 gave me more of an incentive to continue leveling up my favorite favorite heroes – and rewarded my dedication with sweeter and more familiar signature moves.

Truthfully though, while all of that is very exciting – and a step in the right direction in terms of character mechanics – it would have been great to have some more varied and interesting mission objectives to complete. For real, if there’s any glaring fault in this game’s design it’s got to be its uninspired mission structure. I am Iron Man! I’m Thor the God of Thunder, I’m Natasha Romonov, the Black Widow (respectfully), and I want to feel like a hero! During my time spent in and around Avengers Tower, I don’t recall doing much more than: picking up civilians and throwing them into a security jeep whilst fighting the same 5 enemy types (4 different Frost Giants and 1 mechanized flying machine), carrying large crates full of heavy materials, or punching weather machines atop tall buildings for what felt like forever. This is not what I had in mind when Disney told me that they were going to place me inside the boots of some of my most beloved Marvel heroes.

Here’s the deal, folks. I believe in Disney and Marvel, both. My frustrations stem more from Infinity giving me the impression that it’s afraid to truly embrace its source material. I loved the first installment of this franchise to pieces, flaws and all. However, at the end of my playthrough, 2.0 feels more like an over-priced expansion than a bonafide sequel. All the makings of a great game are there. You’ve got timeless characters, worlds that fans want to visit, and an entire house of creative talent manning the ship – yet here we are.

Before we get out of here, I’m happy to report that the Toy Box and Player-Created Content portions of the Disney Infinity platform have never been better. There are some truly gifted and dedicated players out there that have really embraced the level-building tools found in Disney Infinity, and I think that’s pretty awesome. I harp on the fact that we’ve only been provided with one playset pack-in, but truthfully, there are whole worlds waiting to be discovered by registering and logging onto Infinity’s downloadable toy box system. Granted, not all of them will set your imagination ablaze, but every now and again you’ll happen upon a truly inspired world in which to explore – and that’s pretty marvelous. 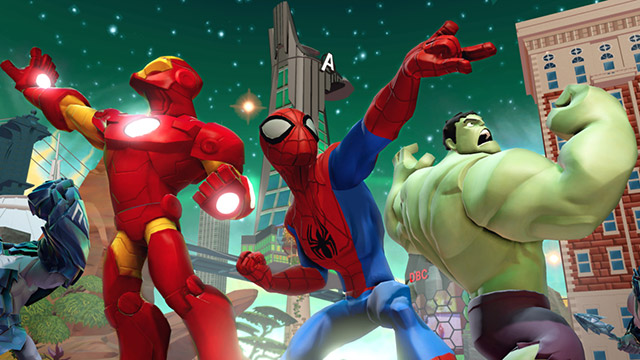 Verdict: I can only recommend Disney Infinity 2.0 to die-hard fans of the franchises in which it dabbles, but even then it’s a risk. Though beautiful ,and filled with seemingly endless possibilities, what’s included in the Starter Set for Disney Infinity 2.0 leaves much to be desired.  That said, much of the game’s potential is unlocked by the imagination of the player, and in the hands and minds of today’s youth – alongside some of Disney and Marvel’s long-time fans – this could be a game full of infinite possibilities.