“Ha ha ha ha! Nice! Growing up, I used to draw all manner of terrible things when I was supposed to be doing my school work. This cover really takes me back to a more unruly time in my life.” – Steve Seigh

Art and Cover by Jorge Corona

“If any of you have seen my artwork, you’ll notice that there are some striking similarities between this cover and my own work with (mostly) Crayola Crayons. It’s all about the “Big Eye” approach. That said, I still find this cover to be pretty sweet outside of being reminiscent of my own style. I particularly like the bloody beak and the vengeful glare coming from those wicked eyes.” – Steve Seigh

“This is still the best Spider-Woman #1 cover to come out of all that hubbub. Jessica looks inquisitive, adorable, and snarktastic, here, and that’s just the way I like her. Sassy!” – Steve Seigh

Well, that’s going to do it for me this week, folks. I’ve scrolled through all the covers for this week several times, and with no disrespect to any of the hard-working artists, nothing else really jumped out at me. So without further or due, I give you Bob’s picks for the week. Enjoy! 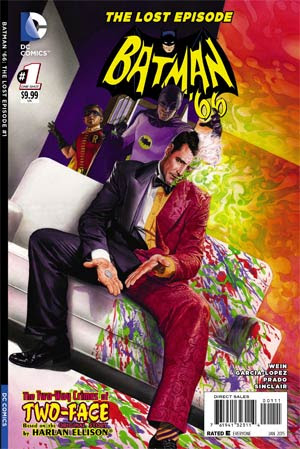 “Based on an un-used Harlan Eliison script for an episode that would have introduced Two-Face, this story here-in gets a great hook via this Alex Ross cover!” – Bob Reyer 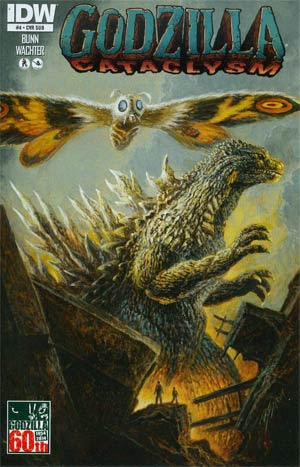 “Master monster artist Bob Eggleton is in his usual fine form here, depicting The Big G about to feel the wrath of the Larrupin’ Lepidoptera, the Mighty Mothra!!” – Bob Reyer 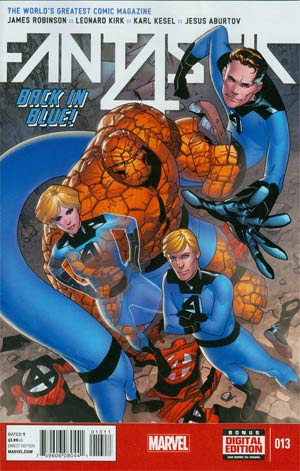 “So sad that just as this run by James Robinson and Leonard Kirk is actually becoming “Fantastic”, it will be going on hiatus, For now, I’ll enjoy what remains, which includes this cover by Leonard Kirk!” – Bob Reyer

AND NOW GIRLS AND BOYS, ANOTHER INSTALLMENT OF…

NOT THE COVER OF THE WEEK!!!

(These are my opinions folks, and hopefully a humourous way to get a point across, so take from them what you will, and send any disagreeing messages to me over at the Forums, and keep Steve out of it. Thank you for your co-operation.)

“It was a tough call, as there were many worthy contenders, including a few from Dynamite (“Dejah Thoris, you get back in here! You’ll catch your death of cold, dressed like that!”) and most of Zenescope’s releases, but the prizes go to The Big Two this time around.

Audrey, may I have a drum-roll, please…

In second place, here’s a book that achieves the celebrated Daily Double, in that a Variant Cover of the same book might qualify for “Cover of the Week”, if only as a hang-over cure for the regular image! 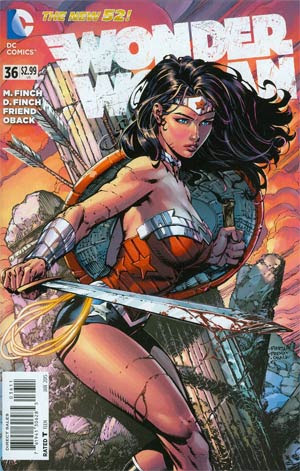 This “Escher-girl” pose for the Amazon Princess on the cover of Wonder Woman #36 is atrocious enough, but when you add in the bloody sword, the vapid facial expression, and the Barbie-like proportions of her body, this image harkens back to the “glory days” of the, as Trina Robbins puts it “barely-clothed, hyper-sexual pin-up” Wonder Woman of the Mike Deodato thong-wearing Diana era!

I did promise a palate cleanser, so here it is. What, you ask, could remove the bitter taste of the fall from the graceful and respectful Cliff Chiang art of the last three years? How about this variant:

Yes, it’s blank, and certainly preferable to my eyes than the actual cover.If I can find one cheaply, I think I’ll have a friend’s five-year old daughter who’s a big Wonder Woman fan draw a cover for me–at least I know it will be more respectful than the regular edition!

Even though it”s 6:51 AM as I type this, I think I need to put some Jameson’s into my second cup of coffee to get over this, so let me apologize to any of you whom I’ve caused similar distress to, or who might have done a “spit take” and fouled up their computer keyboards or smart-phones.” – Bob Reyer

Despite the really lame video, “Warped” is still one of my favorite Red Hot Chilli Peppers tracks. ‘One Hot Minute’ certainly has some highlights like ‘Aeroplane’, ‘One Big Mob’, and ‘Deep Kick’, but once you hit ‘Walkabout’ the vibe of the album changes and makes for a sub-par finale to what could have been a stellar ride from beginning to end. For me, this was the last album to pay attention to from the Peppers.

This is a column featuring Favorite Comic Book Covers of the Week 11/19/14 as chosen by Steve Seigh, Bob Reyer of Talking Comics.