In the 1986 David Cronenberg film the Fly, Seth Brundle (Jeff Goldblum) puts a raw steak through his teleportation pods, cooks it and a second non-teleported steak for a taste test by his girlfriend Ronnie (Gina Davis). Ronnie eats the non-teleported steak and then, with apprehension, the teleported.

“Oh… Oh, oh, tastes funny…” Ronnie says of the second steak, “…It tastes synthetic.” With satisfaction, Seth explains, “The computer is giving us its interpretation…of a steak. It’s, uh translating it for us; it’s rethinking it, rather than reproducing it, and something is getting lost in translation.”

Following the lead of a young visionary indie filmmaker like Christopher Nolan, Warner Brothers should have made the business model of their brand of superhero films to seek out a new wave of up-and-coming young directors, each with their own unique style, and charge them with bringing DC’s other licensed properties to life. Instead of trying to force the characters into a Marvel mold, the WB could have made their own brand of comic book entertainment the way DC did when they rolled out Vertigo in the late 80’s and early 90’s as an alternative to the big splash pages of Marvel and, later, Image. However, they equated the success of Nolan’s Batfilms to their darkness, realism and dim camera filters and decided that all their movies should look similar in order to be successful. Through Zack Snyder’s uncanny ability to mimic the aesthetic of other directors, they have begun, it seems, to reenact Seth Brundle’s synthetic telepod steak across the DCU. What was lost in translation was more than just the notion that what works for one character does not necessarily work for others, it was that what worked for the one was not purely aesthetic, and that aesthetic was not all there was to it. 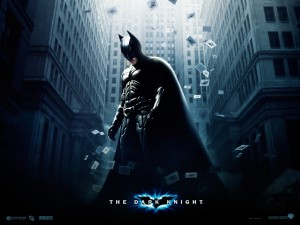 Christopher Nolan is a filmmaker with a distinct vision that he applies to all of his movies, whether capes and cowls are involved or no. He was making Batman Begins and The Dark Knight before the consolidation of the Marvel Film Universe began. At that point there was little reason to be concerned with the world of any one superhero fitting with any other. It was likely, because of that lack of concern, that we got the unique version of a Batman story to begin with. In fact, the same year The Dark Knight was released, the Marvel movies began the connected the universe we know today.

I was personally in Hall H at the 2007 San Diego Comic Con the day the first Iron Man footage was shown and received with much enthusiasm, but when a fan asked of director John Favreau what the release date would be, as I recall, Favreau was quick to respond, “May. We want to give that Dark Knight a wide birth.” to knowing laughter from the thousands in attendance. Who was ahead of the curve then?

2008 was a good year for comic book movies. Iron Man and The Dark Knight were released, each setting a tone for their respective studios. Much like the comic book renaissance of the 80’s, Marvel would be flashy and colorful; DC would be the classy world of big ideas and high-end artistry. Or so I hoped.

I was also in Hall H for the Watchmen panel the same year to hear Zack Snyder describing his vision for the cinematic version of the Vertigo classic. One particularly crowd pleasing moment came when he announced that he had tapped Alex McDowell as his production designer, then connecting the dots between Watchmen and the David Fincher cult classic Fight Club, which was also designed by McDowell. I was certainly excited. I love David Fincher. When I saw Watchmen in theatres, I was relatively pleased. It had a fantastic cast who all did their characters justice. Everything in the book is in the movie minus one seething tentacle creature from outer space (fair enough, I felt, the movie’s alternative made more sense to the plot anyway). And the movie certainly did look like a Fincher film. I had a feeling of slight fatigue at the end, however, and I couldn’t quite put my finger on it. It tasted synthetic. Brundlesteak. It did not make the impact on the comic book film world that the book made on the comic book world two decades earlier. But to be fair, maybe that was because 1999’s X-Men already showed a movie-going audience that superheroes could be neurotic and human.

As he had of Fincher films with Watchmen, in Man of Steel Snyder took the tone of The Dark Knight and applied it to Superman. Mixed reactions all around. I wonder if the executives at Warner Brothers learned the wrong lesson from the success of The Dark Knight. A powerful, socially allegorical tale pitched between artistry and industry, The Dark Knight took what Bryan Singer popularized in comic book movies in 1999 and took it to another level. In the cowled crime thriller, Nolan showed us something we had never seen before. Period. That is ultimately the harder lesson Hollywood has yet to really figure out. If they could quantify fresh and new in focus groups with market research, perhaps it would be more worth the risk to do what needs to be done: to be bold.

As Jenette Kahn brilliantly stated of her tenor as editor in chief of DC comics in the documentary, Masterpiece: Frank Miller’s The Dark Knight Returns, “I always believed that we would never succeed as a company, never grow, never reach the heights we were finally able to unless we took risks. It was one of my maxims at DC, that perhaps you’ve heard from other people, that unless you’re writing off a certain amount of material every year, we weren’t doing our job. Because when you risk you’re also going to risk failure. That comes with the territory. You just hope that you have enough successes to far outweigh those failures you have. You need failure. If you don’t have those failures then you really aren’t taking the risks that will propel you to new territory.” Think movie executives ever operate that way today? They should. It works. The story of nearly every great movie in history, in culture, and the almighty dollar begins with no one believing in them and being seen as a huge financial risk (Examples: Star Wars, Titanic, The Matrix, Lord of the Rings). Unfortunately, those conditions may not be deliberately reproduced, as great art seems to be created through battle with adversity and limitations.

The Dark Knight was taking risks both with the source material and in cinematic achievement. There was also an unexpected casting choice. I admit it: I was really disappointed with the choice of Heath Ledger like many people forget they were. Then we saw the first trailer. Nolan also chose to attempt to break new ground by filming partially in IMAX, which had never been done for this kind of movie. More than that,
this movie had something to say, and it was more than despair, grim and gritty. It was rich with ideas about people and themes that were only supported by the shadows and the coldness. Much the way The Dark Knight Returns miniseries inspired a wave of stories about hard-boiled cynicism, the story itself was about freeing ourselves from those things, not perpetuating them.

So what can be done? I don’t believe that all is lost as we move forward in the DC cinematic universe. There is still time. It may not be possible to capture the kind of lightning in a bottle that seems to happen when careers and budget and reputations are out on a limb when it comes to a secure big budget DC Universe, but they are still free to make choices that will give something juicier than a teleported steak.

In Man of Steel we have a great cast who, as far as I’m concerned, made what they were given to work with interesting to the best of their abilities. I was not so disappointed with the movie overall that I wanted a full reboot à la Superman Returns. I left thinking that I loved the cast, and I wanted to see them get another shot at this.

Now we have the wild card of Ben Affleck. We have a relative notion of what his version of Batman will be. The wise choice the studio made was releasing the news of his casting as long ago as they did. The maelstrom of angry internet memes seem to have worn out just in time for real conversations to be had about what the forthcoming movie will be.

After we have a solid vision of a Justice League movie and everyone is established in, sort of a reverse method from Marvel, once we have our Crisis to explain a major shift, then maybe we can play. New directors and writers with fresh perspectives can be hired. We may still see DC superhero movies with some genuine heart, and shank, and flank.. and sirloin.

“The flesh. It should make the computer, uh crazy. Like those old ladies pinching babies. But it doesn’t; not yet because I haven’t taught the computer to be made crazy by the… flesh. The poetry of the steak. So, I’m gonna start teaching it now.”- Seth Brundle