Ever since the announcement that Gwen Stacy would star as one of the heroes in the Edge of Spider-Verse lead in’s, the comic section of the internet basically caught on fire. People (myself included) absolutely loved the idea. The costume became something that I saw drawings of everywhere I looked and is now guaranteed to be a fixture in cosplay from here on out.  I’m happy to say all of the hype and excitement is justified.  This is a damn good comic. 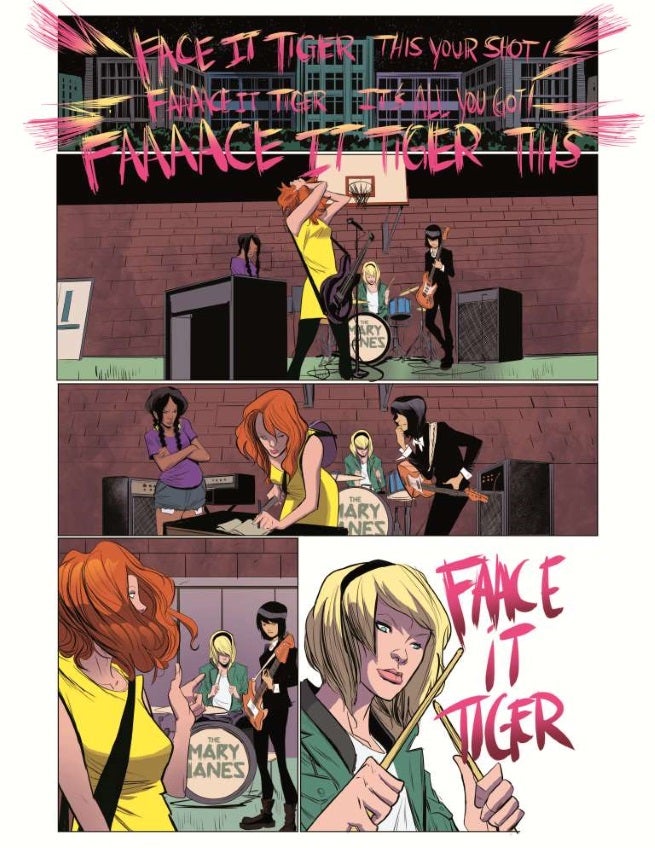 I said last week that I wouldn’t mind seeing more of Spider-Man Noir in the future. While that still holds true, Marvel has something really good here that needs to be explored.  In a time where the industry needs more female led books, one just fell into Marvel’s lap.  If Spider-Girl (the limited run of Peter’s daughter) lasted as long as it did, this will do as well if not better.  Gwen has seen a resurgence in popularity due to the movies and I can’t think of a more deserving character to give some spotlight to.

The issue itself was downright good. It took only one issue to set the stage for this world and my need to see more of it.  While I was right on my initial ideas about who would be where and who would be alive in the book, how we get to that point is really interesting.  It’s been a point that’s been highlighted since preview images came out but seeing Gwen in a rock band called The Mary Janes is freaking awesome.  The famous phrase about responsibility that comes along with the Spider-Man mythos comes here from the most unexpected of places and I found that to be interesting and somewhat amusing.

What a gorgeous book. Robbi Rodriguez and Rico Renzi create a beautiful world for this story to take place in. The surroundings and characters are wonderfully drawn out, but it’s the colors that completely drew me into the book. Also, the sound effects in the book are drawn out and colored to make them really stand out.  I can’t remember another book doing that to this level.  Any way you look at this book I think it’s safe to say this is one of the better looking issues of the year.

Buy this right now. Marvel has something here.  One issue of this took me from intrigued of a Gwen lead book to absolutely needing more of this. I loved this issue, and I don’t believe I’ll be the only one who feels this way. Take the entire team and sign them to a 50 issue run right now.