Multiversity: Society of Super-Heroes: Conquerors from the Counter-World #1 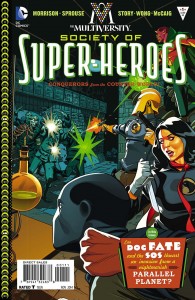 DC has finally begun to answer all of the fans crying out for a more diversity in their books and storytelling. One of the first answers for diversity is Grant Morrison’s “Multiversity”.

Multiversity: Society of Super–Heroes: Conquerors from the Counter–World #1’s interior is as meaty as the wonderfully long title. The issue begins with technically ten paragraphs, whether they are eight lines long or one, Morrison is not afraid to use prose to great affect in what is mostly considered a visual medium.

As many on the show have somewhat expressed, this is welcome, especially with the $5 price tag, it’s nice for to have meat on the bones.

Speaking of the bones, Morrison is someone I am not as familiar with as I would hope to be (I have read New 52’s Batman Inc., a few confusing issues of Action Comics and I have just started reading Happy!) and I have both liked and disliked the small sum of his work I have ingested into my feeble brain. The artist, Sprouse and inking team Story and Wong, along with wonderful colorist, McCaig work together to craft a story that infuses the pulp of the past, reminiscent of Dave Steven’s work with The Rocketeer, and the current prowess of artist such as Chris Samnee and Mike Janin. Even in the incredibly awesome design of Dr. Fate we find nods to the Rocketeer and a little bit of ancient Roman military.

Fights among immortals, familiar monsters, witty banter and the aesthetic and wonder of the superhero cartoons of old, this comic delivers and scratches an itch I think we’ve all had.

One of the many things Grant Morrison is good at is both stalling a story and moving them at lightning speed. What you think this story will be about and where it is going will more than likely surprise you. One thing you can know for sure is that when you open up the comic, you will be taken on a classic pulpy ride that is epic proportions and ultimately fun.

The one con to this is that it feels as if it would work better in trade. The toughest part to swallow is the $5 hickey on your wallet. Seriously, what’s up with this trend?

If you are looking for a great book from DC, look no further. If you are craving something out of that company that feels a little different, tear into these pages. If you aren’t sure about diving into a Grant Morrison story week to week, wait for the trade. With that, the ultimate verdict is that you must read it. You won’t regret it.