Since the first issue of Original Sin I have been enjoying the event mini-series. I cannot speak about any event tie-ins, but the event series has felt rather self-contained without the need to pick up any outside series. 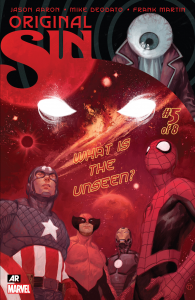 While we have seen the story progressing through each of the issue so far, issue #5 takes a step back to provide some background into Nick Fury’s past that helps to explain the multiple life model decoys and space station he was found on in issue #4. I personally enjoyed the look back as it adds to the gravitas of the situation related to The Watcher. Fury and The Watcher were both witnesses to events few were privy to, and it adds to the overall gravitas of the entire event. However, I suspect that there will be many fans that will not be happy with this issue, as it could be considered to be a huge retcon of Nick Fury.

Personally, I feel that the events portrayed in this issue are not retconning much and show more of what happened off-panel in Fury’s history. It would have been nice to have more events that appeared in past issues to be featured, as I am sure many people would love to go back and dig for clues. (What a great way to market the Marvel Unlimited subscription too! Marvel marketing, give me a call.) This is probably what bummed me out the most with this issue. I do not know much about Nick Fury (or Marvel in the 20th century), so I was hoping to explore a little more into the past of Fury and The Watcher. However, with that being said, my overall enjoyment of Original Sin has not really diminished. Now we know that anything is possible from here on out.

The issue was also beautifully done by Deodato and Frank Martin. The entire series has looked stellar. There is detail in the facial expression drawn by Deodato. Martin’s use of different shades and tones brings a realness to the art that almost makes you forget you are reading a comic and not watching a movie.

If you read the first four issue then BUY IT. Original Sin #5 goes deeper into Nick Fury’s past, and provides a link between him and The Watcher. The overall story does not progress much, but some much needed back story is provided.