Issue #10 marks the end of the second arc of Ed Brisson and Johnnie Christmas’s pre-apocalyptic tale, Sheltered. The book will take a month off and then return in August to begin what will be it’s final arc, ending at issue #15. While I wasn’t quite as impressed with the second five-issue story as I was the first, there is still a lot to love about this title, and I for one will be excited to see how Brisson and Christmas decide to end this tale of woe. 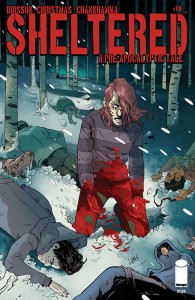 When I say “arc”, I want to be clear: Sheltered #10 doesn’t have a cut and dried end point like so many other Image titles do. In fact, I suspect that the only reason for the division is to give a clear marker for the trade paperback. At some point, I hope that this whole story will be collected in one volume so readers can plow right through it as a single, cohesive story. Issue #10 opens on a house divided, with two trailers burned down to empty shells and the specter of death hanging over all of Safe Haven. At this point, there could be said to be three factions on this odd little island. There is Lucas and those who follow him, Victoria and those who believe her, and an emerging third faction, untrusting of Victoria but also angry with Lucas. These are the most dangerous, and after a brief check-in with Lucas to make sure that he really is the craziest person in the trailer park, we find out that these other wing-nuts are hellbent on killing Victoria and company before they can leave Safe Haven. Words are exchanged and yet another child dies before the curtain falls on the issue.

The conflict in Sheltered hangs on a fascinating principle: is the world really about to end? If not, then Victoria is right and all of these kids are just maladjusted sheep following a false prophet. If so, then Lucas is right and a much more interesting question emerges, “Is everything that these kids are doing actually justified?” Only time will tell as to which way Brisson and Christmas decide to go, or if they address the apocalypse at all. Unfortunately, however, part of the failing of this second arc is that the violence and madness have gone so far that, while one can still ask whether it’s all justified, the answer is becoming less and less relevant. Much of this second arc felt like nothing more than characters constantly yelling at each other, which had the effect of losing the voices that Brisson had so expertly crafted in the noise. That being said, however, this story is still an excellent study of human nature, and I’ve had to get used to the fact that no one in this book is safe. In fact, the whole thing could make a convincing anti-gun argument if anyone really wanted to do that.

Along with the screaming matches that became so frequent in this second arc, Johnnie Christmas’s art became more and more distended and over-exaggerated to match. I have very mixed feelings about this as sometimes the effect was to make the character as outwardly grotesque as they had become inwardly, while other times it was almost goofy when it shouldn’t be. I also feel like the faces of many characters are losing definition, and I started to lose track of who was who. But, this second arc was much more action packed than the first, and Christmas has done an excellent job of keeping the tension in the panels throughout. Whether the characters are hunting a traitor through the woods or staking out a local farm, the anxiety is always at a fever pitch, in no small way due to Christmas’s sketchy, expressionistic style. Colorist Shari Chankhamma continues to do an excellent job keeping the color palette mostly bleak so that when something explosive happens, scenes of fire, of other places, and of the outside world in general pop that much more.

Buy it. I do think there is a perfect way to read Sheltered, but I’m not sure it’s available yet. Single issues are fine, and add to the suspense and tension from book to book, but threads can get lost in the downtime between issues–especially with so many characters. The trades will have the same problem up to the point where the last one is available and it can all be read at once. I believe it will read best over a weekend, with a glass of wine or beer by your side, sitting in your favorite chair. If you’re getting it in singles, like me, then there is no reason to stop, just make sure you set aside a time to re-read the whole story once the final issue hits in early 2015.