I was not too impressed with the opening issue of this crossover event, Superman: Doomed, but my overall opinion of the event has changed since reading Action Comics and Superman/Wonder Woman. While Doomed felt busy and cluttered, both of the follow-ups this week have been enjoyable. Action focused on Superman dealing with his transformation, and Superman/Wonder Woman dealt with Diana tracking down Clark. 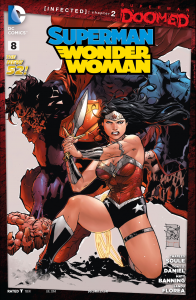 With each issue of this series Soule has been strengthening the relationship between Clark and Diana, and that trend continues in issue #8. Most of the issue revolved around Diana’s search for Clark after Doomsday was defeated and Clark was infected. Through her search we got to see how Clark’s change has been affecting others in his life. I also felt as though we got a better understanding of Diana and depth of her feelings for Clark.

It was all of this helped to make Superman / Wonder Woman #8 such an admiring and engaging read. Soule always does such a great job with showing the love between these two characters, and you can especially feel it in this issue. The issue was superb, and if not for Batman’s brief appearance, it could have been even better. His initial meeting with Wonder Woman served its purpose of delivering some vital information to her, but his second appearance in Clark’s window just felt a little silly.

Tony S. Daniel as always delivers beautiful art. I really love his style. This issue is crisp and clean. Morey’s colors bring real beauty to the world and to Diana. I thought she looked stunning in this issue. Daniel really captured all the beauty, strength, and confidence of this amazon/god of war.

This is a buy. However, be aware that this is part of a crossover story. DC does provide a recap page at the start of the issue, so you could probably read this on its own. We get a good luck at the relationship between Superman and Wonder Woman, and a more Wonder Woman-centric issue this month. Superman / Wonder Woman #8 (along with Action Comics #31) provide the emotional depth that was lacking in the opening of this crossover.