So, when last we spoke Deadpool got married. Issue #28 of the series is the first back from that oversized anthology, and is an interlude with Deadpool and his new bride–the demon-lady Shiklah–where they travel to Tokyo. Unfortunately, I’m not sure whether this issue is a one-and-done kind of thing or the start of a bigger story, and that uncertainty makes the whole thing feel like a throw-away. 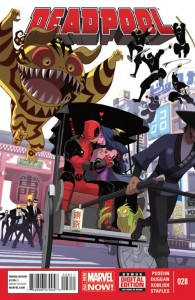 First, let me draw your attention to the recap page. I don’t usually read these, but in Deadpool they can sometimes be very funny, and so I decided to go for it. It does a pretty decent job of not only harkening back to the wedding itself, but reminding us of the time the Merc with the Mouth spent in Korea, where he found out some dark things about his past. If you haven’t read this arc–called The Good, The Bad, and The Ugly–I recommend it as it was probably the best story of the new Deadpool series thus far. The recap page also does some foreshadowing in regard to Deadpool’s marriage that I found enlightening. Check it out if you have the time.

The story itself is pretty crazy. ‘Pool and Shiklah are in Tokyo for some reason that the merc will not divulge. In fact, we the reader spend most of the book as in the dark as Shiklah, who is not a character that I really wanted to sympathize with. Deadpool carries with him a suitcase full of money, which becomes the target of street urchins with some crazy tech. The whole thing has a bit of an Oliver Twist vibe, until the Yakuza, Sunfire, and The Hand all get in on the action. Finally, after Shiklah really shows her stuff, the suitcase returns to Deadpool and we find out that he is delivering it to one of the dopple-X-Men from the Korea incident to help him with his family. The issue ends with some indication that all is not okay with the pseudo-mutant.

I this is the beginning of a new Deadpool arc that will circle around to the Korean X-team, then it works well enough, I suppose. But, the story really feels like a one-shot funny interlude on the way to the honeymoon. If that’s the case, then I find myself questioning the need for this issue altogether. Only time will tell, but I think it would have been a good move on the part of the writers to give us some better clues of that. There are some good one-liners and what not, but for the most part this is one of those low points that has been characteristic of the current series.

Scott Koblish’s art is good in this issue, especially with the giant digital monsters that the child thieves use. The high point in the art for this issue, however, is in Val Staples colors, which do a great job of making a Tokyo city street into a bright and colorful extravaganza.

Wait and see. If I’m wrong and this turns out to be the first part of a larger arc, then so much the better, but right now it feels utterly skippable. As I said before, I feel like this Deadpool series runs in waves, with highs and lows that seem to oscillate on a pretty even frequency. That being the case, next issue should pick up from this one, and we should be off and running again with the Merc by issue #30.