With the All-New Marvel Now releases I have been picking up almost every first issue to get a feel for a series. Before reading Cyclops #1 I knew practically nothing about the series. I flipped past the cover so fast I did not even take note of the writer, but I am kind of glad I did not. The only other Greg Rucka work I can recall reading is his run on Punisher, and I think if I had been conscious of reading a Rucka story, I would have constantly been comparing it throughout my first read through. 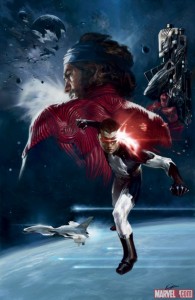 Cyclops #1 is something different. At first, I got a strong impression that this was a Guardians of the Galaxy clone (minus the hot alien assassin and raccoon, but yay for hot alien squirell?), but by the end of the issue it is evident that the series is something different. The first issue does not have much in the way of plot, but serves as a setup for what is likely to come. Cyclops appears to be a series that will focus on the relationship between a sixteen year old and his estranged/thought-to-be-dead father.

There is chemistry amongst the characters, and the premise could be interesting if done right. The dialog had enough quips to be entertaining and keep us engaged throughout the issue. All in all a decent first issue, but it could have used a little more “umph.” However, Rucka was able to spark some interest in the time-lost Cyclops to keep me around for a few more issues.

I feel that what I enjoyed most was the crisp and clear art from Dauterman and Sotomayor. There was a very upbeat and adventurous vibe running throughout the issue. It got me excited and looking forward to some romps in space with this father and son team.