There are two types of characters in fiction: those who lead and those who follow. Oddly enough, it’s the ones who follow that we don’t like because they don’t feel real. They are the ones who do only what their writer tells them to, and we end up cocking our heads to one side as we read and thinking, “Is that really what this person would do here?” Unfortunately, James Tynion’s The Woods is populated almost entirely with these characters, making what is an interesting premise with some unique ideas into a number one that won’t make it to number two for me. 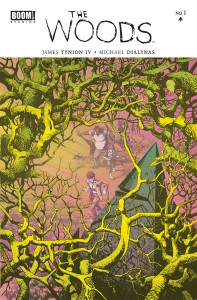 The book begins in a girls’ locker room in a high school in Milwaukee. Karen is bemoaning her procrastination over applying to college and her friend, Sanami, is trying to console her. Hash tag: prep school problems. Suddenly, a young man wearing nothing but a smile bursts in to ask for a skirt to wear. But, instead of screaming or telling him off or doing anything that would seem reasonable for an actual teenage girl to do, Karen and Sanami take off after the kid with field hockey sticks. The action follows our streaking friend as he passes the principal and a couple dozen other students on his way to god knows where. After running into the only black kid in the school, Ben, the story baton is passed to Isaac, who goes in to meet his friend Adrian in the computer lab. Adrian is apparently too smart for living, while Isaac extols on how upset he is over not getting a part in the school play. He is, of course, gay, and I think you might be starting to get the idea about these characters. It’s like the Breakfast Club gone horribly wrong.

Then, the whole school flashes out of existence on Earth and lands on an alien moon orbiting an unfamiliar gas giant. The students pour out to get a good look, but only a couple of them seem actually worried about the whole thing. The student council president tries together everyone for a meeting, but she’s also the one who seems to think that she could run the school better than the adults. The teachers then start to realize that they might be safer inside the school and herd everyone in there, but shortly after, one of the native creatures smashes through a window and starts eating a student. (The wrong student, in my opinion.) Not too long after, we find out that Adrian is forming a party to go out into The Woods. He believes that he understands the intent of the entity that brought the kids to this planet, and that they must reach the center of the woods in order to fulfill it and get home. The book ends with several of the kids–not the group Adrian was hoping for–striking off into the heart of The Woods.

One of my biggest problems with this book is how much Adrian seems to know about the situation that the kids are in, and how much he’s thought it through. He’s completely unphased by the fact that they are on an alien planet at all, and only focused on getting into the woods. He ends up providing all of the exposition that is in this first issue, and even if he ends up being wrong about all of it, his monologuing just serves to make him seem less believable instead of like the smart guy character. In general, the characters that Tynion has created here just don’t work. I’ve yet to find a comic that he’s written that I’ve been able to get into, but I had high hopes for this, his first foray into creator owned work. Unfortunately, even though he is Scott Snyder’s protege, Tynion just doesn’t seem to have a grasp on all of the elements that make a great story. A piece like this must be character-driven to really work. Without that, it’s just a bunch of ideas and actions being carried out by robots.

I will say that I found the art by Michael Dialynas to be well suited to the story. In many ways it felt like the intention for this book is to be read by younger readers, middle and high school maybe, as Tynion’s dialog never breaks above the occasional ‘freaking” for language. With that in mind, Dialynas’s art has a general animated/cartoon look to it that would translate well to the small screen. His characters are all unique and immediately recognizable, his backgrounds full and interesting, and his creatures sufficiently creepy. My only problem, and it may not be an art problem, is that the school seems a bit deserted for how big it is. There should be hundreds of students in a school this size, but we really only see a few at a time, even in the backgrounds. Colors by Josan Gonzales were good, especially when they get to the alien planet. On Earth, the palette is largely warm colors, but once the kids are teleported away, it’s all purples and blues and greens, even inside the school.

Skip it. I’m planning on passing this one off to my oldest son–a sophomore in high school–once I finish this review, partly to test my theory about a younger audience. However, no matter the audience, these characters just don’t have the breath of life that takes them from being just drawn faces on a page to something more transcendent. There are a lot of great ideas and intriguing possibilities in this book, but that only makes the lack of good characters all the more upsetting to me.