Here’s the thing about cliché: there’s a reason it’s cliché, and the reason is that it works. It works well enough that it’s been used over and over again. We generally think of cliché as bad writing, but it’s really only bad if it’s used incorrectly. So, when I say that The Outsiders War–the second major arc in Jeff Lemire’s amazing takeover of Green Arrow–is cliché, please don’t mistake me. Lemire wields it in a way that makes the story feel familiar and compelling but not distracting. Also, the elements that Lemire uses create an instant sense of drama while also helping the reader care about a rather large cast of characters in a short amount of time. To like Green Arrow is to embrace the cliché, to see it for what it is and not care because the story is still cool and fun and dramatic and so many other things that we are only allowed to get away with in comics. 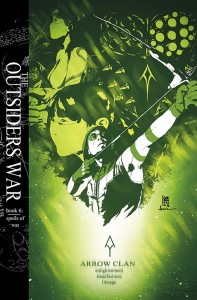 Issue #31 is the final issue in The Outsiders War. On the cover are the symbol and the values of the Arrow Clan: enlightenment, steadfastness, lineage. Inside, Oliver Queen is at the end of his tether. A man he never thought he would see again is dying at his feet, his nemesis for the last 14 issues is getting away, and he’s apparently now in charge of a magic arrow and a clan of assassins that is somehow attached to it. It’s a lot to process on a rainy night in a foreign country. Elsewhere, Katana leaps onto a boat full of chemical weapons to try and stop it from becoming leverage for the Outsiders’ reign of terror. She faces off against the head of the fist clan, and the results are not surprising. Yet elsewhere, Emiko, the little girl at the center of much of this melodrama, finally learns the truth about who she is and who is the man she’s been calling father. She quickly runs off to get her revenge, and no one really seems interested in stopping her. Oliver tricks the megalomaniacal Komodo, but doesn’t have time to capture him before Emiko appears on the scene. Still, the only person who seems bothered by the final outcome is Oliver.

At this point in the story, I think Oliver speaks for the reader as he expresses his fatigue over the The Outsiders, and his want to just go home. Like the end of any hero’s journey, Oliver is given the choice to stay and lead The Outsiders or leave it all behind, and he doesn’t really blink before walking away except to let them know that he won’t be kind if they turn up on his turf. I’m sure this is not the last we’ve seen of The Outsiders, but it’s nice to think that after six issues, we will get a break from them for a while.

Much of the reason to read Green Arrow lies in the art. While the story may seem like something you’ve seen a million times, the way that Andrea Sorrentino and Marcelo Maiolo put together this book is genuinely unique. What Sorrentino understands so well is that this isn’t Superman—Green Arrow doesn’t punch the bad guy and make him fly 30 feet before smashing into a wall. These are people who have the strength of regular people, and so when they fight, an action that may turn the tide of battle could be subtle. And so, what Sorrentino does is he frames and highlights those subtle moments, often within the larger frame of the battle, and then Maiolo comes in and colors these frames differently—most often by leaving the figure in black and white while coloring the background red. Sometimes this bleeds into a large panel for effect, but most often it’s the smallest thing: an arrow strike in a critical spot, the appearance of a character from the shadows, an object in the frame that might not seem as important as it is. This technique gives Green Arrow a cinematic quality that I just love looking at, and makes the art even more interesting on multiple readings.

Buy it. It might be melodramatic and it might be cliché at times, but Green Arrow is still ultimately fun and eminently readable for those qualities, not despite them. And I’m really not kidding when I say that the art is worth reading the book for, even if the story wasn’t. What Lemire has done is made the character cool, made the universe interesting, and created a story that will also appeal to fans of other media. Oh yeah, and you know that Arrow TV show? If you like that, you’re going to like this too. I have a feeling that there are a good number of Arrow fans who will be getting Outsiders War trade paperbacks in their stockings for Christmas this year.