It’s almost time, ladies and gentlemen. This week was the last episode of Agents of SHIELD before the season finale next week! Lots of info dropped this week, some of it spoilery, so I will tread carefully. The good news is that Agent Garrett (played by Bill Paxton) is back and badder than ever, we start to see why the Girl in the Flower Dress is worth watching, and we get to understand all of Agent Ward’s daddy issues! Let’s get started! 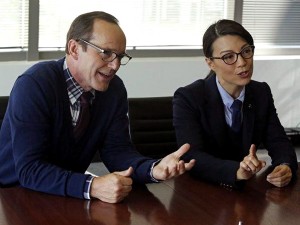 The episode begins in flashback at a high security juveline detention facility. Here we get to see the first meeting of Agent Garrett and the boy who would be Ward. Young Ward is not a very happy kid, and it looks like he’s about to get the book thrown at him over the small fact that he tried to burn down his family home. Agent Garrett gives Ward and offer he can’t refuse and off they ride into the sunset. Back in the present, Skye, Fitz, Simmons, May, Triplett, and Coulson have all finally started to come to grips with the fact that they are no longer SHIELD agents. Coulson, however, still has his unflappable sense of right and wrong, and with that, the team decides that they will infiltrate Cybertek–the company that provides the technology behind Deathlok and HYDRA. Before they leave, however, Triplett brings in the heavy stuff: old Howling Commandos spy tech that once belonged to his grandfather. Everything from joy buzzers that are actually EMPs to something called a “hypnoray” that looks like a hair dryer. And, of course, Coulson goes seriously fanboy.

In one of the show’s best moments, Coulson and May go undercover as Fitz and Simmons to get into the Cybertek building. In the process, Skye meets her match as all of the tech company’s files are stored in the most devious manner of all–on paper! The team very comically steals a whole filing cabinet’s worth and takes off to analyze the data. We get another flashback where Garrett leaves a teenage Ward in the woods with nothing but a change of clothes and a dog. Things really start to speed up at this point and so much of what happens is potential spoiler territory that I don’t want to get too far into it. But, here were my favorite moments: Raina is starting to figure out what Skye is, and I think it’s going to be awesome; “I brought tacos!”; Fitz finally steps up and takes some action again; Ward was a member of HYDRA before he was an agent of SHIELD; Garrett becomes super-charged; and the team end up face-to-face with a bunch of Centipede thugs with stolen SHIELD tech. Next week will be epic! 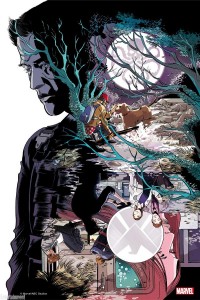 This episode was a season highlight for me for several reasons. Many of those reasons have to do with cast performances that just keep getting better and better. Bill Paxton absolutely runs circles around every scene he’s in. He’s such a fun, charismatic villain, but we also get a good look at the anger that led to his turn to HYDRA. Ward just gets more and more interesting every episode, and Brett Dalton does a wonderful job with every layer he’s given of the character. Raina is also a joy to watch in each episode as her character becomes more and more fascinating. My only concern with this episode is that it’s teed up a lot for the season finale next week, and I’m not sure how they’re going to fit it all in!

Watch it. There’s only one more episode left, and it’s going to be a doozy. A lot of people have already changed their minds about Agents of SHIELD, and I think there will be more heads turning after the finale. Get on board now and watch it with us next week! Plus, Samuel L. Jackson as Nick Fury!