Finally, everything is right again with the universe. At least, with the Ultimate universe. Because Ultimate Spider-Man is back! No matter what they call it, no matter what they may change around it, Brian Michael Bendis always brings us the best of what superhero comics can be. And, thankfully, even after Cataclysm and six-plus-months without a regular issue, Ultimate Spider-Man is not only just as good as when it left–it almost feels like it was never gone. 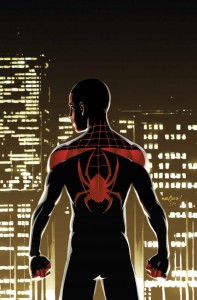 Miles Morales is a high school kid in New York. He’s got a girlfriend, he’s got family troubles, he has spider powers. Sounds familiar, right? Well, even though the formula may be familiar, the pieces of this puzzle are still different. Miles lives with his best friend, Ganke, because Miles’s dad skipped out when he found out his son was Spider-Man. Now, Miles is just trying to be a good student, a good boyfriend, and a good superhero. Unfortunately, forces are starting to move in the shadows around him, and it looks like Mr. Morales is in for a bumpy ride.

Issue one does a couple of things, and does them very well. First, it catches up with Miles, which I’ve hinted at above. Second, it starts to show some of the villains that will be making appearances in the short term and, I imagine, also the long term in the series. The book begins with a little inter-agency shuffling as some poor dweeb takes responsibility for Norman Osborn as the SHIELD facility where the villain was being held is shut down. There are, of course, problems in transit and it seems safe to assume that Norman is no longer a prisoner. At the same time, a pair of thieves wearing armored suits and bearing some resemblance to the wall-crawler are on a city-wide crime spree. And, somehow tied to one or both of these events, Miles sees someone who should be dead.

I was fully expecting this level of quality from the renumbering of Ultimate Spider-Man, but it’s a joy to read all the same. Of course, I think it also makes the other Ultimate titles pale in comparison, but I’m okay with that so long as they keep Miles around. I’m also really excited to get to know the Ultimate universe’s Norman Osborn as I haven’t heard or seen much about the character before now. Finally, I think that Bendis does quite a good job recapping Miles’s life without making the information seem boring, which makes this a great jumping on point as well as a continuation point for veteran readers.

Maybe I had forgotten just how much I enjoy David Marquez’s art or maybe he’s just gotten better in the time off, but this is a seriously good looking book. Marquez does something with the faces of his characters that takes them beyond realistic and into lifelike. I think his layouts are also pretty amazing as they aren’t really flashy or fancy, but they can get quite creative while still flowing perfectly from frame to frame. I was also impressed with Justin Ponsor’s colors in this issue as it felt like he was using a new and slightly different color palette than he was several months ago when the series ended for Cataclysm. Miles is a conflicted and emotional character right now, and Ponsor’s use of different colors in different scenes seemed to reflect Miles’s moods perfectly.

Buy it. As I said, Miles Morales: The Ultimate Spider-Man is both a great jumping on point as well as a great catching up point for those of us who’ve been waiting for Miles to come back. And, as much as I dislike the title, it turns out that I think it will be important going forward. Either way, Ultimate Spider-Man is back and here to stay. Even if the other titles are not up to snuff, you can always count on Bendis to make Ultimate Spidey a great story with great characters every time.