Cullen Bunn’s quartet of Deadpool miniseries have been some of the best stories the Merc with the Mouth has had the pleasure of running amok in recent memory. While each series has dovetailed into the next, there also seemed to be a larger meta story that’s been headed… somewhere. That being said, I don’t quite know what to do with Night of the Living Deadpool. Now that’s it’s over–sort of–I found the miniseries not only strangely somber but completely confusing as to Bunn’s larger narrative. I don’t know whether Night of the Living Deadpool is supposed to fit in or not. And if it does, where? 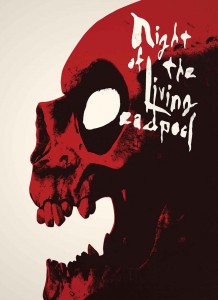 This final issue of the four-parter puts Deadpool back where he started: all alone. And while Wade is still cracking jokes in nearly every panel, the silence that falls around him makes the whole thing seem utterly tragic. It’s like if Steve Martin had starred in Cast Away, complete with a talking zombie head Wilson. (In fact, surprised Deadpool himself didn’t make that joke.) So, the plan for this final chapter in Deadpool’s zombie vacation is to get to the AIM facility where the virus was developed and create a cure. Yeah, not so solid a plan, but what other option do you have when everyone else on the planet is either dead or walking dead. Still, the idea seemed pretty thin, and I have to say that I was skeptical that Bunn could get the whole thing wrapped up in just one issue. The good news is that the series did not end on a cop-out happy ending where everyone gets better. The weird news? The issue ends in a way that I would never have suspected, and leaves the whole thing open for a sequel. I did enjoy how the whole black and white vs. color thing paid off, however.

Ramon Rosanas’s art here is just as good as the first issue, maybe better, and he does some really great work here with what he’s being given. The locations and backgrounds are particularly interesting in this issue, and the fact that the world is black and white while only Deadpool himself remains in color keeps the merc in that creepy isolation that makes the whole book come together. Now that I think about it, I’m really glad that the issue is so heavily monochromatic as it would have been really, really gross otherwise.

Wait and see. As I said before, I’m not sure if this series is supposed to fit into Cullen Bunn’s Deadpool master plan or whether this was a one-off mini. Either way, it’s not bad,  just don’t expect the kind of laughs that the previous minis have provided. However, if you’re one of those readers who is looking for a more “serious” Deadpool story, this might just be the ticket.