I’m not going to lie: this one cuts me deep. Wolverine and the X-men was one of the first Marvel books I picked up after I started collecting comics again, and I’ve gotten every issue since. Jason Aaron’s funny, whimsical, and endearing book was among my favorite reads every month for the last two and a half years. To change writers, to me, is almost unthinkable. And so, as you might imagine, I had my pencil sharp  for this review, ready to hate on Marvel and Jason Latour for what they’d done to one of my favorites. The reality, however, is that while it’s not a perfect book, this new Wolverine and the X-Men gets a lot of things right and manages to retain a good deal of the tone that made Aaron’s book so delightful. 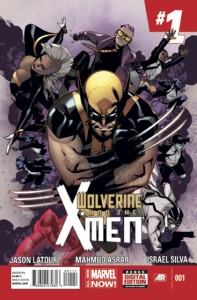 After a couple of introductory pages featuring Edie, Evan, and Quentin in the future, we find ourselves back at the Jean Grey School for Higher Learning. The term may have ended, but since it’s a boarding school for wayward mutant youth, a good number of the kids stay for the summers. As it turns out, our favorite punk rock mutant, Quentin Quire, has been promoted to teaching assistant and has been assigned a classroom full of rowdy mutants to keep an eye on. Eyeboy has been put in charge of orientations for new students, and spends much of the issue chasing an antlered young lady who doesn’t seem to speak. Wolverine is somewhere out in the universe trying to recruit Fantomex (who is a thousand times better protrayed here than in the newest iteration of X-Force.) And through it all, Storm tries to keep the peace at the school while also keeping it in one piece. The story relies heavily on a particular aspect of the recent Battle of the Atom event, and the one negative i can safely attribute to the book is that it relies too heavily on the past for a first issue. However, with most of the book’s focus on Quentin Quire and what he’s going through post-Battle of the Atom, I’m having a hard time complaining. He’s by far my favorite character in the X-World right now, and giving him a little bit of pathos can only help to deepen the character. My only other complaint about this issue is that they didn’t give us much to go on for next issue–no cliffhanger or even a solid inkling as to what will happen next. That’s okay, because I’ll be sticking around just for these characters, but I can’t really speak for other readers as to whether this issue was enough to hook them.

Marvel seems to be developing a sort of stock style in the X-books, somewhere between Oliver Coipel and Ed McGuinness, and Mahmud Asrar toes that line quite well. I know that not everyone loves Chris Bachalo, but I’ve always been a fan, and so that is another area where this title misses the mark a bit for me. However, Asrar’s art, which is also tinged with just a bit of manga, is very good, and his panel layouts and composition are perfectly executed in this book. Colors by Israel Silva are also quite good, though I feel like Marvel’s got a stock palette here as well. I just, you know, miss the old days a bit.

Buy it. As I said, this title might not be as new-reader friendly as it should be for a first issue, but it also didn’t leave the old readers in the dust. It’s a solid issue, a good introduction to the school and these characters, and the promise of good things to come. I only hope it can deliver another 30+ issues of awesome like Jason Aaron did.