It is hard to talk with your friends at length about Quantum and Woody without at least mentioning the Goat. Is he some sort of enigmatic bioengineered creature with nefarious plans to destroy the world? Is he just a goat with laser eyeballs? Maybe he’s just something random thrown in to add to the whackiness of the series. Whatever preconceived notions you have, Goat #0 should still leave you feeling a little surprised with a raised eyebrow and one hand stroking your chin. 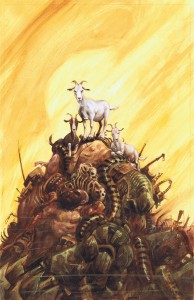 What Asmus and Fowler give us is an enjoyable romp through the Goat’s life as he sets off to meet the love of his life, Dolly the cloned sheep. The Goat’s misadventures aren’t expanded on too much, and are presented as more of a montage leading up to his first meeting with Quantum and Woody. (Minor Spoiler: It’s not when you think it was.) I would have liked to have seen more of the Goat’s solo adventures before becoming a lab experiment. The Goat was special before he got laser beam eyes, and I feel like seeing more of his travels lends itself to the style and humor of Quantum and Woody. The issue delivered on the humor, but there were definitely some missed opportunities.

Fowler was the original artist on the series at its debut, so it was nice to have him back. Ming Doyle has been doing a fine job on the series over the last arc, but my personal taste lean towards Fowler’s work. If I had to give you an exact reason, I would say it is just the way he can make the Goat emote. With the reveal at the end of the issue, the look on the Goat’s crying face from the opening pages is all the more sad.

This revelation ties into everything that has been going on in Quantum and Woody. While I enjoyed the issue, I feel like this important information could’ve been given to us as a later time, but then again I just want some more Goat in Mexico stories! If anything the Goat has now become a hugely important part of the overall story.

If you are a fan of the series, then pick it up. I can’t recommend this for new readers, because some the characters the Goat bumps shoulders with are ones that would be unknown. It’s not entirely important, but some impact would be lost. It’s definitely an issue you can skip, as the major revelation on the last page will be repeated in upcoming issues (or on the recap page). At the end of the day this is a comic about a Goat that sets off on the road to meet Dolly the Sheep, so if you want something whacky and fun, give it a shot.