The Hulk has gone through many transformations and it is important to examine the complex inner emotions explored in the several different comic books including the regular series to the many different spinoffs. The first used the Grey Hulk and the character  could speak but only a few words at a time. For many years the  issues and the storylines revolved around everyone else finding out who the Hulk really is. Originally the Hulk was supposed to stay grey but they decided to turn it  green due to ink problems. The Green Hulk is the most well known and seems to be created out of showcasing childlike frustration.

The Hulk from this time period does not seem to have bad intentions just can’t control his emotions. By examining the different versions of the Hulk it becomes easier to understand that the comics are exploring the different personality traits personified through this one intimidating beast.

Bruce Banner, the Hulk’s true self is a mild mannered scientist who could be viewed as the calm reasonable side in all of us. He is an intelligent but frail human being. But then when we grows angry it is another story all of his inner fears , frustrations and anger come boiling to the surface. Banner has spent his life trying to control the rage within him and find a cure. 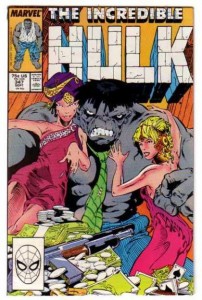 During one of the most creative period in Hulk’s history they returned The Grey Hulk to prominence  and he became Mr. Fixit under the direction of writer Peter David. The hulk was a mob enforcer in Las Vegas. This Hulk seemed smarter but also more devious. He seemed to delight in causing pain sometimes just for compensation.  Greed is one of the seven deadly sins. And this Hulk faces consequences in each issue for choosing this career path.

This same Grey skinned Hulk over the years seemed to have become smarter and more adult over the years but still retains his childlike frustration and impulses.

So What does this Hulk and other versions  suffer from. Some  have displayed this condition as a form of dissociative identity disorder or as it is more commonly referred to as multiple personality disorder.  Some of this condition can be caused by trauma and we learn over his life Banner has experienced many painful episodes.These disorders can explain the disease Banner faces.

In one issue they examine the disorder further by having Doc Samson examine the Id, Ego and Superego. Another character Ringmaster helps Samson Get Banner   get to the bottom of his abusive father and his murdered mother which they conclude is the underlying cause for the split in personalities. The three have separated Bruce Banner is the superego, Grey Hulk aka Mr. Fixit is the Ego and the Green Hulk is the Id.

Afterward  in the main series the plot switched and for a time period  the Hulk became a green skinned action hero working for the Pantheon helping with rescue and relief missions making up for his savage Hulk days. There seems to be a recurring theme of regret in these storylines . He has merged with his Banner persona so with his intellect intact  the team enlists his help. His brute strength as well as his intelligence has become  an asset. The Hulk proves he can be a positive force in the battle against good vs. evil.

The Next series involves a 100 year future featuring an evil alternate version of the Hulk called Maestro who has some different powers. For example he can see  and interact with astral forms. He has also retained the intellect of Bruce Banner or at least considered to be on that type of scientists genius level. But This Hulk is purposely diabolical and bitter towards the way the world has treated him. He rules his world called  Dystopia with an iron fist. The Maestros’ physical appearance is different he has a white hair and beard. Sometimes he wears a robe further exemplifying a ruler image. In some  of these issues  different versions of hulk’s have met. These different hulk’s have battled each other and in one particular  issue the Green Hulk has been teleported to the future to stop his future evil counterpart. No matter what the Green Hulk does these issues conclude he is nowhere near the evil that the Maestro emulates. 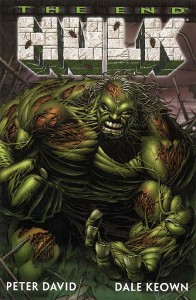 In another interesting hulk twist; in one issue called The End (2002) the Hulk  was partially devoured by giant insects and regenerated his own body.  It is fitting that he is regenerated only as Hulk but at the end of the issue ,The Hulk realizes he is finally alone. But is that what he really wanted. Hulk feels cold understanding in this issue that Banner is really gone. This could be seen as the basic need for companionship. Sometimes when we get what we thought we wanted it turns out not to be what we really wanted at all.The Hulk needs both sides to truly survive.  He now finally realizes it but it is entirely too late there is no going back.

A newer version  from a series called the Red Hulk has many of  the same powers but also  can emit heat from his eyes. This time this Hulk  is not Banner but  his nemesis Thunderbolt Ross. This is the new angry Hulk. For many years Thunderbolt Ross hunted the Hulk.  For most of his life, He was obsessed with capturing the beast. Now he has become everything he  has abhorred.  This idea is  interesting because those who  criticize may become afflicted with the same issues or conditions. What will they do when they are struck with the same affliction.

The Hulk is a complex character full of the aforementioned childlike frustration, bitter revenge motif, and sometimes even malicious intent. Sometimes the Hulk feels regret and empathy and exhibits other basic human traits. He explores the best and worst in humanity and the inner demons recognizing what lies deep inside of us. It is a lesson in the easily recognizable warning signs and the awareness of what just may awaken the monster within.

Follow
Edgar Rider has worked for two school districts, a children's museum and a domestic violence shelter in a child development center. He has been published in Rogue Cinema,Criterion International Journal Modern Rock Review, Room 101 Magazine, The Short…