A while back I remember hearing the hosts of a podcast urge their listeners to, if they weren’t already, read the crap out of Daredevil.  One of the incentives they gave was that you could then be one of those people decades down the road who could chime in during local comic shop discussions with a “Yeah, I remember reading that when it was first coming out,” therefore earning looks of awe and amazement from younger generations of funny-book readers.  Obviously this was said jokingly, but there is a certain magic in knowing that you’re reading a sure-to-be legendary story in real time, like watching a new chapter in the history of a character you love dearly unfold before your eyes.  That’s basically what it feels like being a Batman reader right now.  Not only has “Zero Year” been a hugely entertaining story so far, but there seems to be at least one moment each issue that feels as if it will be etched upon the tapestry of the Bat-Universe forever. 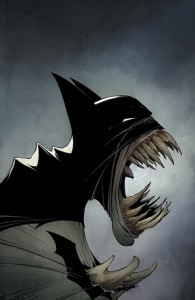 Continuing this streak, Batman #27 offers up something new in the story of James Gordon’s early days in Gotham city.  This flashback about midway through the issue doesn’t make up the entire month’s installment, but it is certainly the highlight.  After helping Batman escape Commissioner Loeb’s death squad of a SWAT team, Detective Gordon relates to his new ally the difficulty of trying to be a good cop in a dirty force, leading us down a path that hasn’t been explored in this much depth since Frank Miller’s “Year One”.  Without taking anything away from his story, we soon see that the level of danger he and his young family have been in is higher than we could have imagined, which gives us more insight into the moral fiber and courage that Gordon has.  At this point we see a man living in fear but we can also that, like Batman, he’s an outsider taking tremendous risks to do what he thinks is right despite the danger it may put him and the people he loves in.

Aesthetically, the book continues to look gorgeous.  Greg Capullo’s art and Danny Miki’s colors complement each other beautifully, with Miki’s work giving the big man’s rendering of Gotham a borderline pulp feel while keeping the modern tone of the setting.  Capullo’s facial work still amazes as well, adding to the more potent moments like Gordon’s horrible ordeal with his dirty co-workers.  If you follow his twitter, you know that Greg works his ass off every day on these pages, and that certainly shows in the finished product.

Buy It – Get in on the ground floor while you still can!  Batman #27 delivers as Scott Snyder and Greg Capullo continue to delve deep into the pasts of these legendary characters, revealing levels of complexity in ways we haven’t seen before.