Doctor Who: Prisoners of Time 1-12
Written by Scott and David Tipton
Art by various*
Review by Mike Duke

I consider myself a Whovian. Thanks to Netflix, I watch a lot of Doctor Who. There is not an episode of the new series (2005 to present) that I have not watched multiple times. I have strong opinions on who is the best Doctor, the best companion, the best villains, and which are the best episodes. All that said, however, I had never ventured outside of the television universe before this year, when IDW announced that they were printing the twelve-issue miniseries Prisoners of Time to coincide with the 50th anniversary of the Doctor. What I found is a fun, faithful comic featuring all eleven doctors and their most famous companions taking on classic villains and having a grand old time. 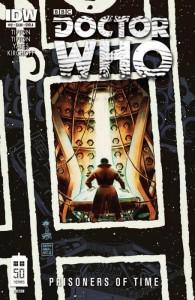 To be clear, the story in this series does not tie into the story of the 50th anniversary special that aired this weekend. This is a stand-alone story. That being said, it’s actually more like the TV season that you wish existed, but couldn’t. Each issue features one incarnation of the Doctor, from the first to the eleventh. Each issue reads like an episode of the show, mostly isolated and unique. However, there is also an over arching story that takes place in all of the books, culminating in the final, twelfth issue, available November 20th. In the individual stories, we get to see every one from the Sontarans to the Judoon, Ice Warriors to the Autons, with some unfamiliar bad guys sprinkled in between. The larger story features a new threat–a surprise I will not ruin–who is capturing companions from out of time and collecting them in order to enact revenge on the Doctor. I actually cheered when I found out the villain’s identity, and fans of the new series–especially season one–should have no trouble recognizing him.

My biggest problem with the series is the art. Each issue features a different artist, and the art fluctuates quite a bit. Some issues are decent, some are downright ugly, while few are really great. This is the most evident in the rendering of the Doctor and his companions, who are supposed to look like their human counterparts but do not always hit the mark. I will say, however, that the standard covers by Francesco Francavilla are awesome, and for an added level of geekiness, they all connect together to form an image of the TARDIS.

Buy it. Who-heads will find a lot to love in this series so long as you can look past the inconsistencies in the art. And, there are already two of the three trade paperbacks available if you want to read it that way. However, an Amazon search tells me that there will also be a single volume available in the near future. And, as I’ve said, the single issues are pretty cool also. This series is all about the fun, and I think Who fans will find themselves smiling wide as they read. If you have not yet ventured into the Doctor Who extended universe, like me, this is a great place to start.