Uncanny X-men #14 reminds me why events make me sad. By and large, I enjoyed Battle of the Atom, but this issue reminds me that the event was really just a distraction in the middle of a really good on-going story. Fortunately, this book is now back to business, and in a lot of ways, back to Bendis. 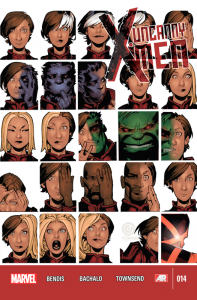 Issue #14 follows a student of Cyclops’s new Xavier School named Benjamin Deeds. He doesn’t have a particularly dynamic power, and he’s having a hard time with Cyclops’s training regimen. Emma Frost takes him under her wing and starts to teach him how his powers can be used to help the X-Men. Ben will, usually unconsciously, begin to change into anyone who is near him, taking on their physical characteristics to the point of being an exact copy. We also begin to find out that he has a subtler power set that allows him to make people around him feel good and trust him. Ben and Emma spend an evening in Atlantic City honing his powers, and by the time he gets the hang of it he can walk into a secure facility without raising an eyebrow. The whole book is really just this one character coming to grips with his powers, and it’s nothing but fun. Emma Frost is witty and funny in ways I haven’t seen before, and Ben is utterly convincing as an awkward teenager. This really is the best of what an X-Men story can be.

And, to top it all off, Chris Bachalo is back. I’m a huge fan of Bachalo, and even though I know his art is not perfect, this is the art that feels right for this book for me. I know that sometimes it gets hard to tell which blond is which, and I know that Emma Frost looks like jail bait, but I don’t care. I still love the art, and now that I know the story inside, the cover is absolutely hilarious.

Buy it. If you left during Battle of the Atom, come on back. If you haven’t been sure about Uncanny up to now, give it a try. The story of these new, young X-Men is so much fun that it really shouldn’t be missed.