I’m not sure that I ever really understood the point of annuals. Lately I’ve seen them used for everything from an anthology issue to an extra issue in a series to a one-off with a different creative team. Superior Spider-Man Annual falls into the later category. I suppose Dan Slott and company could use a break after cranking out two issues a month for almost the last year. Unfortunately, this annual ends up being a one-off that could have just as easily been a part of the regular series. 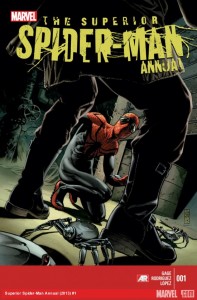 The story is familiar: one of Spider-Man’s rogues gallery returns to reek havoc on the city and soon finds out that this Spidey is willing to get his hands dirty. In this case, the villain is Blackout. He’s actually a Ghost Rider villain, and there is an interlude in which Superior Spider-Man seeks the counsel of Danny Ketch, the last Ghost Rider. The big difference in this story is the inclusion of Aunt May, which leads to the book’s only new development. But it’s not enough that I can see why we needed an annual. This feels just like another Superior Spider-Man one-off, which is not bad. The story is fun enough and treats Otto/Peter with respect and accuracy. The Ghost Rider connection was the only thing that I really found odd–to the point where I asked Google whether Christos Gage has any other ties to the flamey-headed character, but I didn’t come up with anything.

The art was an interesting change from what has become the sort of “house style’ of Superior Spider-Man a la Humberto Ramos. The way that Javier Rodriguez draws Spider-Man is more realistic than I’m used to. He doesn’t look like he’s made of rubber as he swings around the city. And I loved Rodriguez’s emphasis on Spidey’s boots. It made him feel more grounded.

Wait and see. If you’re reading Superior, there’s really no reason not to get this issue. Unfortunately, I can’t find a solid reason to pick it up either. There is a development that will change how Spider-Man is viewed by the public in the story, but I’m sure it will be reiterated elsewhere. If you need to save five bucks this week, then save it. However, Spidey fans will find everything familiar in this issue, so if what you want is more, then this issue will definitely satisfy.