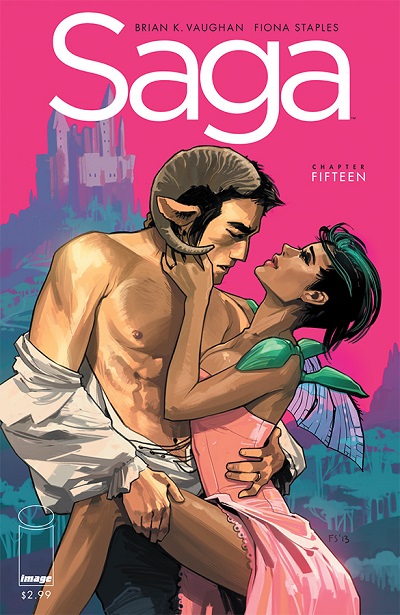 Heads Up: A few small spoilers have been seen lurking in these waters. Yarr.

Well done, Mr. Vaughan.  B.K.V. has cliff-hanger endings down to a science, and to say that he has outdone himself this issue would be quite the understatement.  He revels in his ability to send you crumbling to the ground, a hyperventilating mess of sobs or screams, with the final page of an issue.  Whether your emotional destruction is warranted or not varies.  You’re either being treated to a cruel fake-out or an even crueler reality for a favorite character.  And therein lies the real mind-game: which side of the coin will it be?

Doff and Upsher, the intrepid reporters we first met back in Saga #13, open this issue as they attempt to get some “deep background” from Alana’s former commanding officer Countess Robot X.  From there we find Marko, Alana, and company enjoying some R&R in the home of author D. Oswald Heist, while also struggling with the decision of what the next step on their journey should be.  Meanwhile, The Will stumbles across a disturbing secret about the planet he, Sophie, and Gwendolyn have been calling home.

If the only good thing about this issue were the realization that there needs to be an actual version of Nun Tuj Nun made, it would still be a sweet installment. But of course, there’s much more to it than that.  Vaughan continues to build the tension in this arc as we get closer and closer to the scene it initially opened with.  You can practically see Prince Robot looming on the horizon as Alana and Marko try to figure out what they’re family should do next.  That sense of dread, along with the gut-punch that are the final two pages, give this issue a deceptively dark tone amongst all the fun moments.

The reporter characters that were introduced at the beginning of this arc, Doff and Upsher, keep getting more and more interesting as well.  Are they a slime-ball tabloid team out to make some mad cheddar, or are there nobler intentions to be found in them?  Just when you think it’s one, you get evidence to the contrary, making these two and their part to play in the larger story so intriguing.

The image that stuck with me the most in this issue, the one that made me almost snort iced-tea from my nose in front of a group of startled strangers, was Alana triumphantly beating Klara in an arm wrestling match with a cheering Marko in the background.  Not sure why, but it got me.  It’s the perfect example of the comedy this series has showcased, thanks to the art of Fiona Staples.  Not many artists can do funny quite like her.

Buy Saga #15, folks.  It’s another consistently awesome issue from the dream-team of Brian K. Vaughan and Fiona Staples, one that’s sure to make you run the gambit of emotions.  Also, you’ll want to play Nun Tuj Nun after.  Trust me.