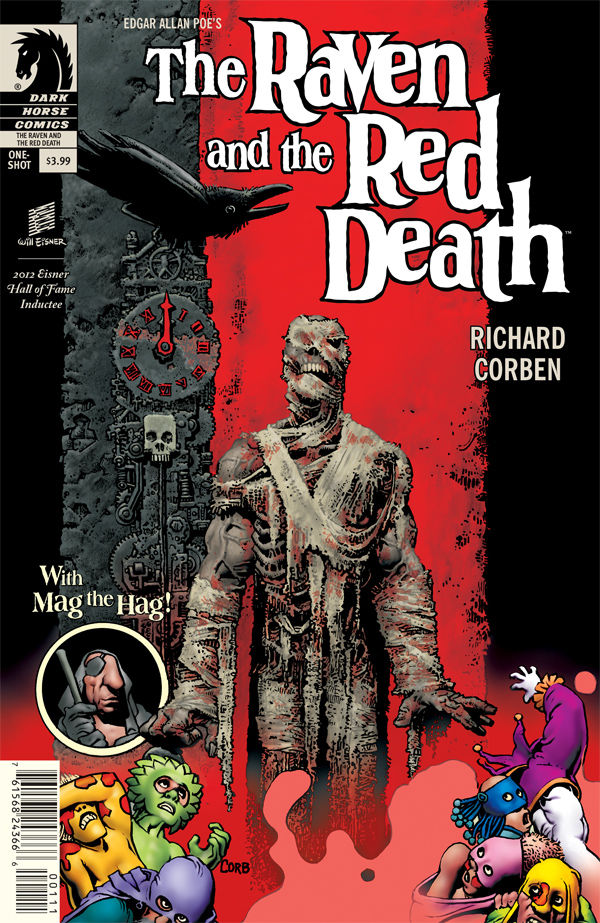 THE RAVEN AND THE RED DEATH REVIEW

Adaptations can be a daunting task in the world of comics. There are some franchises that succeed in making the jump from other mediums to comics (think Buffy or Brian Wood’s Star Wars). For every successful adaptation, there are hundreds of graphic novels that do not stand on their own or are not particularly good comics (Twilight or The Girl with the Dragon Tattoo, anyone?). Conversely, certain elements that work in comics may not translate to movies, books, or television.

Richard Corbin has the challenge of bringing Edgar Allen Poe’s gothic poetry and short stories to life. Poe’s work is filled with brutal, violent imagery and madness. Most readers at least have a passing familiarity with “The Raven,” and its famous line “Qouth the Raven: Nevermore.” As a quick refresher, a young student named Arnold is mourning the death of his love (Lenore, rhymes conveniently with Nevermore). The raven becomes the physical symbol of his emotional distress as he slowly descends into madness. I’ll save the lectures on the poem’s rhyme scheme and biblical allusions for another day.

Corbin succeeds in conveying Arnold’s loss of sanity and uses the raven as a metaphor to strong effect. Unfortunately, that’s where this adaptation’s strengths end. There’s no real sense of suspense or mystery around Arnold’s obsession with Lenore. Despite a few creepy panels, I never feel that spine-tingling dread or methodical pacing that are so characteristic of Poe’s poems. The artwork makes good use of shadows and darkness, as any good horror comic should. Yet the story is at its weakest with panels that convey little chemistry between Arnold and Lenore.

“The Masque of the Red Death” is generally considered an allegory about the inevitability of death. In order to escape a plague, Prince Prospero shuts himself up in an abbey with his friends and hosts a lavish ball. His opulence and power are highlighted by seven rooms decorated with different colors (each symbolizes one of the seven deadly sins). Everyone is jovial until the clock strikes midnight and a masked figure in red enters the abbey. Out of the two stories, this carries more emotional weight and feels more impactful. Corbin’s execution is best with his characterization of Prince Prospero.

The Verdict: Pass. Unless you are a huge fan of literary adaptations, this may not be the comic for you. This one-shot adds very little to the stories themselves and doesn’t feel particularly scary.