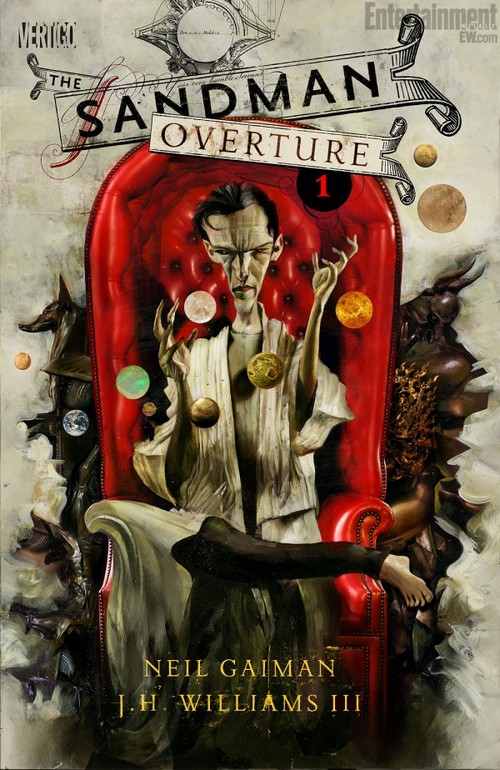 In 1989, Vertigo published the first issue of The Sandman, by Neil Gaiman, a series that ran until 1996 and featured multiple top rate artists. The Sandman is one of only a few graphic novels to grace the New York Times best seller list, along with Watchmen and The Dark Knight Returns. It’s epic fantasy story, long list of engrossing characters and other worldly visuals changed what readers expected from comic books, setting the bar at a height very few books following it have been able to touch. The Sandman is the chronicle of  Morpheus, the Dream King,  and his kidnapping, the consequences of which reach far and wide through both The Dreaming and the waking world. Morpheus has siblings who all rule their respective pieces of our world, Death, Desire, Despair, Delirium, Destruction and Destiny. Twenty five years later, Gaiman has returned to The Dreaming to tell the story of how the Dream King was captured, a question fans of the series have wondered for so long. Sandman will be a six issue, bi-monthly series with art by J.H. Williams (Promethea), and covers by Dave McKean (The Sandman, Hellblazer).

Overture #1 opens with the birth of a galaxy, the exploration of a planet where the foliage are intelligent and sensitive. The dreams of these plants are interrupted by the introduction of destructive fire that brings with it death. Also, an old friend to Sandman readers, The Corinthian, rears his grinning, tooth eyed face. He is a creation of the Dream King, but one with a murderous will and a habit of breaking the rules. With a fondness for feasting on the eyes of his victims, Corinthian is not a lightweight character and to me seems a good sign that Overture won’t hold anything back.

Destiny and Death have a chat about what appears to be the end of Dream, a big reveal to make in a first issue. During what seems like an every day meeting between rebellious creation and it’s master, Dream casually pronounces Corinthian a failure and declares his intent to uncreate him but Dream is suddenly pulled from his task by an unseen power. He has no idea who he must answer to, only that he must makes preparations for his absence from the realm he controls. And so begins the prequel to the Sandman’s adventure that was begun back in 1989.

As a long time fan of this series, I can not express how excited I am to see it return. I’ve re-read my Sandman trades a few times, each time it was just as much fun as the first. Neil Gaiman has slipped back in to this story like a perfectly worn in glove. The Overture #1 feels like home. The art is as brilliant and beautiful as the original, the characters feel as if they never left. The Sandman has always melted the lines between poetry, performance art and classic comic book form. It can be a bit of a complex riddle to those unfamiliar with the territory and I’m interested to see how newcomers to the Sandman will interpret this series.

Verdict: The Overture #1 is a wonderfully orchestrated return to a set of long loved characters. The rhythm feels exactly as it should and I have all the faith in the world that Neil Gaiman will pull in a whole new set of fans with this series. Whether you are a veteran to The Sandman or a curious new reader, you should most definitely jump on this train right from the start, it promises to be a hell of a ride.