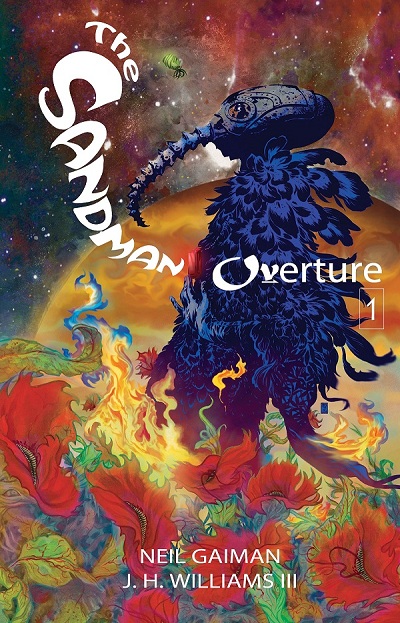 I am the paragon of procrastination.  With approximately 20 years of residence on my ‘To Read’ list, I have yet to get around to reading Neil Gaiman’s critically-acclaimed Sandman series.  To be fair, it’s not due to any lack of desire on my part, not at all.  Instead, the blame falls squarely upon the massive popularity of the title even after all of these years; more to the point, a popularity that has seen my local library bare of the collected issues whenever the desire (read as: memory) to partake of it has hit me.  So, contrary to my standard habits, with the release of The Sandman: Overture #1 this week, I thought I would take my unique position (as what seems to be the last comic fan on Earth who has not read the previous chapters) to see if this return to the setting could work as a starting point for we few uninitiated.

Before we start, a baseline must be set though.  With decades of existence in the pop culture zeitgeist, surely some aspects of this title must have seeped into my brain even without reading it.  Well, you would be surprised.  Here are the three things I knew about The Sandman before reading this issue:

That’s it.  That’s the entirety of my knowledge heading in.  Rather pathetic I know, but do not doubt the power of my ignorance when it comes to staying in the dark on stories I wish to read.  But duty calls, and it is time for one of we Sandman-ignorant reviewers to bite the bullet and see if this is a viable starting point.  So let us take the dive together, and see if we first-time readers can enjoy this newest chapter in a long beloved tale.

I’m no stranger to Gaiman’s style of writing, even without a single one of his comics crossing my desk until this point.  I’ve read many of his prose titles (American Gods, Neverwhere, Good Omens [w/ Mr. Pratchett], etc) and have found that while his concepts are vast and complex, it is his character work that more-often-than-not brings the overarching drama together into a sum that is greater than its parts.  But what truly stands out in this transition to the comics medium for an author I am familiar with, is how much his scripting and storytelling is left in the hands of the artist.

I would be remiss not to start with that aspect of the title, and with J.H. Williams III handling those duties, so would Mr. Gaiman if he did not leverage him to his full extent.  Luckily for all involved, Williams III appears to have been given plenty of space to bring his A-game, and throughout this first issue of The Sandman: Overture, beautifully captures the surreal aspects of the characters and their environs without losing track of his duties to the plot in the process.  With flowing transitions through scenes and moods, stark contrasts to highlight story points, and all of it stacked upon his unorthodox yet stunning layouts, it is a difficult median to straddle but one that he makes look so very easy through his efforts.  To sum up, I am a story-driven consumer, and as such I can rarely see myself stating this, but one could legitimately purchase this issue and enjoy the artwork on its own merits, story be damned.

But the story, that portion of the medium that has elevated this setting so high amongst those who have read its earlier incarnations, was exactly the thing that had me most intrigued as I sat down to read this issue.  With a bar set so high, I will not lie though, as my ignorance of these characters and the world they inhabit did tax my enjoyment of this introduction.  Reading through the first time, I wasn’t even aware of the protagonist’s name (as I can assume now, there does not appear to be anyone actually named The Sandman), let alone which of the characters introduced in rapid succession was our lead until the final pages of the issue.  With those basic facts in mind, the second read-through was much more enjoyable, and started to make a bit more sense; even with slews of questions regarding these characters’ relations still looming in front of me.  Where that would normally turn me off from a storytelling aspect, I found that just enough contextual information was given to present these things as an unfolding mystery, which helps to increase my curiosity as to where the story will proceed, and will hopefully continue to be utilized as a vehicle to bring we unlearned few into the fold alongside those of you who know these characters intimately.

For those that know these characters, an easy buy.  For those who appreciate stunning artwork, also a simple buy.  And finally, for we who have not partaken in this setting before, I give a tentative buy.  Is it a perfect introduction for those of us looking to jump-on?  No, not really.  It will require some effort on your part to keep pace with what is being presented.  Does it look to be an interesting start if you are willing to put in that legwork?  That it does.  The following chapter will play a vital role in determining if this is a viable self-contained story, but the manner in which the mysteries are presented, combined with the gorgeous delivery of those scenes within this chapter, at least have me curious enough to find out.