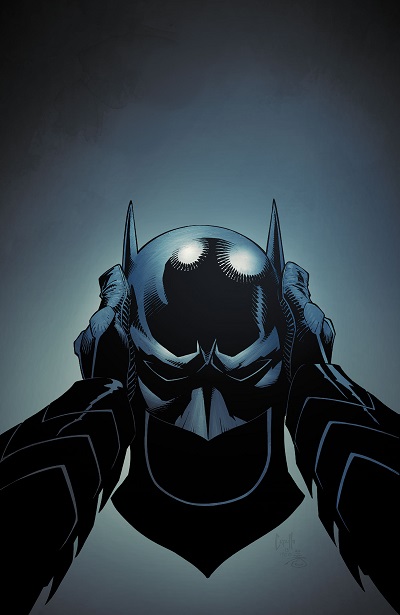 Fearless. When all is said and done that one word will undoubtedly be used by anyone trying to describe Scott Snyder and Greg Capullo’s Batman run.  Since issue #1, this Dynamic Duo has taken people’s expectations regarding what could still be done with the Caped Crusader and turned it on its head.  Think it’s impossible at this point to create a great new villain for the Dark Knight to face?  Bang!  Along comes “The Court of Owls.”  Think the great Joker stories have already been told? Wabam!  Take a look at “Death of the Family.”  Still hanging onto the argument that Batman’s early days are not worth visiting again?  Well, just give this book a read.

We open to find out that apparently there’s a new monster roaming the streets of Gotham and it’s got the Red Hood Gang spooked.  Bruce, now dressed in full bat-getup, has begun his war on crime and has been busting thugs like it’s going out of style.  After coming across some clues as to the gang’s plans for an all-out strike against the city, Bruce must spring into action for a final showdown between the Batman and Red Hood One.

Scott Snyder once again defies expectations with this issue as we find Bruce now donned in full costume, foregoing the clichéd montages we’re used to seeing in Bat-stories like this.  Not a single shot can be found of him and Alfred pouring over design specs of the costume, of batarangs being sculpted and tested, or of Bruce giving lengthy explanations as to the advantages of striking fear into the hearts of criminals.  Snyder instead chooses once again to cut out the fat in the story that we know and offer up something that’s familiar in the right places but feels altogether new.

For longtime Batman fans, this issue will be a treat.  There are plenty of little easter eggs to be found which illustrate Snyder/Capullo’s successful attempts at placing this story in the context of the other great works that came before it.  Capullo’s art shines beautifully in these instances, from the first-appearance inspired Bat-suit (Holy crap, the purple gloves!) to Commissioner Loeb’s toy riddled office at GCPD headquarters.

And just when you think it’s getting a little too referential with its clever nods, we see parts of Batman’s early days that we haven’t seen before.  What has been so refreshing about this take on the young Bruce Wayne is how headstrong, brash, and cocky this twenty-something version of him is.  This Wayne feels relatable in a way that he hasn’t felt in a very long time.

Buy It – Whatever doubts you may have had left as to whether Snyder and Capullo would be able to pull off this retelling of Batman’s early days should be dashed away with this issue.  It’s well paced, action packed, and full of some clever tributes for longtime Batman fans to pick up on while still being great fun for those new to the series.  Welcome to Bat Country!