Marie Severin and Ramona Fradon: Queens of the Silver Age

As we were putting together this year’s “Women in Comics Week” and our individual celebrations of various characters and creators from the distaff side, it struck me that many of you out there are probably unaware of the talents and achievements of Marie Severin and Ramona Fradon, who during my time as a young comics reader were virtually the only female artists working in mainstream comics, a fact that might seem unbelievable considering today’s (still-needs-more) improving landscape. As our podcast guest and legendary creator Trina Robbins has pointed out, through the Golden Age there were quite a few women toiling in comics studios or bullpens, including DC editor Dorothy Woolfolk, Timely inker Violet Barclay, and artists such as Ruth Atkinson, Lily Renee and Tarpe Mills. However, with the virtual collapse of the comics industry due to Dr. Wertham’s “witch-hunt” and the institution of the Comics Code in 1954, jobs in the creative areas of comics production were at a premium, and the promising start that women had made at the onset of the industry in the Thirties had mostly evaporated. The two incredibly talented women that I’m going to shine the spotlight on here both worked as artists during the early Fifites, and managed to navigate the choppy waters of the industry down-turn and emerge as fan favorites throughout the Silver Age of Comics. 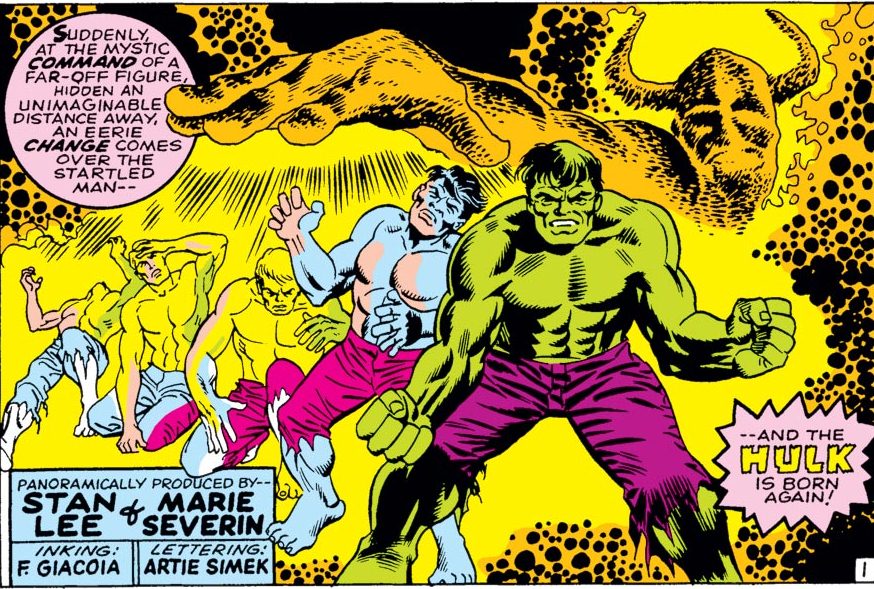 Marie Severin’s comics career began while she was working on Wall Street after two brief forays into art school. Her brother John was working at the Charles, William and Harvey Studio, and asked her to come aboard as his colorist. E.C. Comics editor Harvey Kurtzman would recruit the pair, and Ms. Severin’s first published work would be coloring her brother’s art for the Sept. 1949 issue of A Moon, a Girl…Romance. She would stay with E.C. as lead colorist for their legendary horror books, as well as inking, lettering and pencilling comics across their line. In 1955, when William M. Gaines reduced the E.C. output to just the newly-upsized Mad Magazine, Ms. Severin took her talents to Timely/Atlas, but as the industry continued its rapid compression, she eventually took a job with the Federal Reserve bank. One day in 1964, tired of what she described as a “dopey job”, she wandered over to see old friend Stan Lee, who hired her on the spot to do all sorts of production work. In late 1966, Marie would take over the pencilling duties on the Dr. Strange feature in Strange Tales #153, although her first cover would be this beauty from #154: 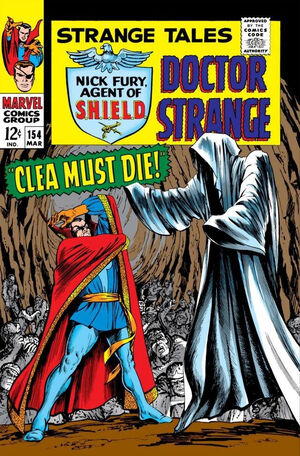 She would also pencil the adventures of the Sub-Mariner and the Hulk, including their epic battle in Tales to Astonish #100: 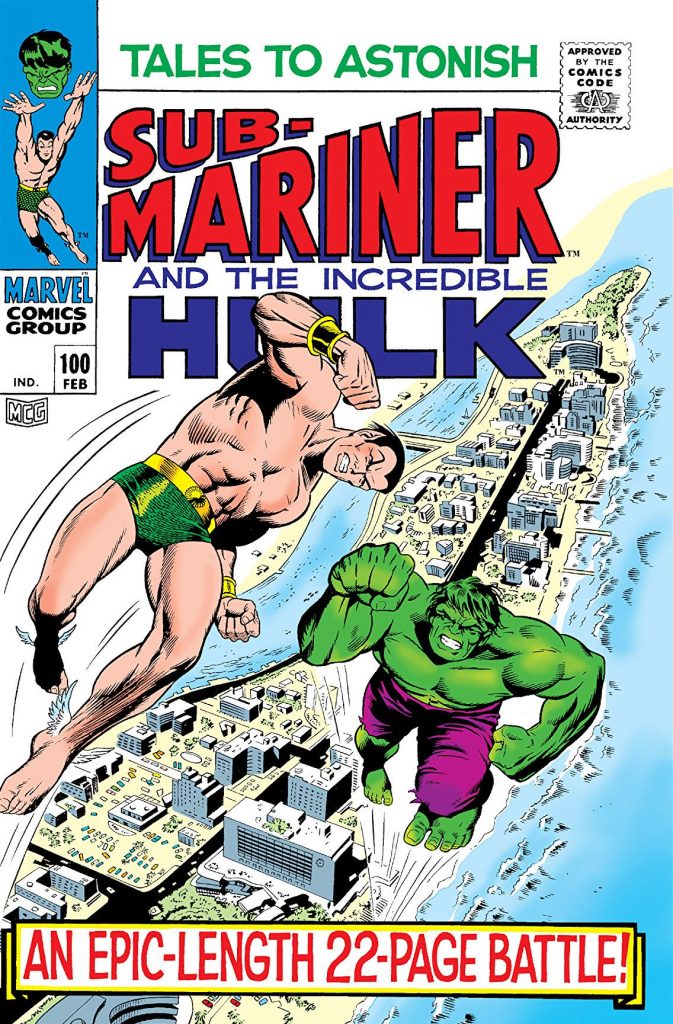 Ms. Severin’s talent for caricature and humour would come to the fore when Stan Lee decided that with the growing rank of comics trying to be pseudo-Marvel, “If everyone else is determined to imitate Marvel, we figure that your ol’ Bullpen can do a better, nuttier, funnier, more exciting job of poking fun at itself than anyone else can do”. Thus was born Not Brand Echh, and the book that would secure Marie Severin’s place in many comics fans’ hearts! Her work here was brilliant; as someone who knew how to draw super-heroes seriously, she could take the cliches to the extreme, and she always knocked it out of the park, with her art appearing in all 13 issues of this amazingly funny series. The highlight would undoubtedly be “The Origin of…Stuporman” from NBE #7, which was written by Marie along with Roy Thomas, and is a hilarious take on all the “super-barnacles” that had accumulated onto Superman during the Fifties and Sixties. 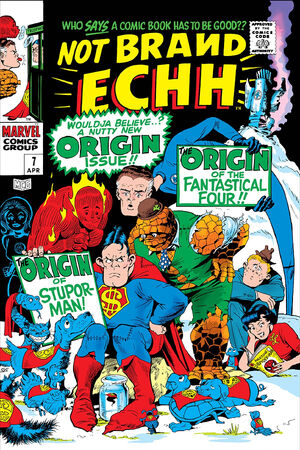 Marie Severin would stay at Marvel well into the Eighties, pencilling the first two issues of The Cat by writer Linda Fite in 1972, and co-creating Spider-Woman and designing her costume in 1976, as well as acting as Assistant Art Director before moving into the children’s division of the company. She is a multiple award winner, and a member of the Eisner Hall of Fame. This Stan Lee quote says it all about this multi-talented creator: “Calling Marie the best woman artist in the business is an injustice. Marie was one of the best artists in the business, period.” Excelsior, and Amen! 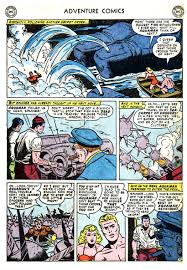 Long time DC Comics artist Ramona Fradon’s career actually began at Timely in 1950, when Stan Lee assigned a war story to the novice artist. Ms. Fradon had decided to give comics a try as a career despite never having read one, as finances were tight for this art school trained newlywed. Not thrilled with the war story’s violence, she took her samples to DC, where editor Murray Bolitnoff put her immediately to work on The Shining Knight back-up feature in Adventure Comics #165. Mere weeks later, Mr. Bolitnoff would put Ms. Fradon on the strip for which she would be most remembered, pencilling and inking the new Aquaman feature that was breginning with Adventure Comics #167, an assignment that would last for a decade. until issue #282 in 1961. When Aquaman moved to his own title at that point, Ms. Fradon had a 2-year-old daughter at home, and fearing the increased work load of a complete book as unfeasible, Ms. Fradon chose family over work.

She wrote and drew a children’s book that went unpublished, but even so, when DC editor George Kashdan called in 1964 saying that he had an idea for a new feature that she might find intriguing, Ms. Fradon’s answer was “Never!” She reconsidered, and building off his idea, Ms. Fradon and writer Bob Haney created Metamorpho, the Element Man for Brave and the Bold #57  (1/65). The quirky nature of the lead, and the dynamic supporting cast were perfectly-suited to her style and its sense of fun and adventure.

Metamporpho’s two-issue Brave and the Bold try-out would lead to his own series in August of 1965, but for Ramona Fradon, the expanding work-load, the industry’s growing fascination with “all super-heroes, all the time”, and the more violent aspects of the story-telling that was coming into vogue all combined to erode her desire to continue. So despite her obvious talent for the work, after four issues Ms. Fradon walked away from comics once again to become a full-time mother.

In 1973, Marvel writer/editor Roy Thomas called to see if Ms. Fradon had any interest in returning to comics. With her daughter now a teenager, she decided to take a chance, and pencilled a story for writer Linda Fite’s The Cat (which sadly went unpublished due to that book’s cancellation), and finished her short stay at Marvel with a well-remembered issiue of the Fantastic Four, the Gerry Conway-scripted #133 that featured a memorable appearance by Thundra, a book that Roy Thomas very much wanted to collaborate on with Ramona Fradon, but couldn’t clear his schedule for.

Ramona then returned to DC in 1973 where she pencilled horror tales in House of Mystery and House of Secrets for editor Joe Orlando, a short stint on Freedom Fighters, a long and successful stewardship of the Super Friends, and a nine-issue run on a charcter perfectly-tailored for her sensibilities, Plastic Man. After this seven-year return engagement at DC, Ms. Fradon was then offered a chance to succeed creator Dale Messick on the long-running Brenda Starr comic strip, a task she would remain at until her retirement from on-going comic work in 1995. Ramona Fradon was named to both the Women’s Cartoonist and Eisner Halls of Fame, and still appears at a few conventions per year, doing sketches and commissions in her singular style, and in 2012 had a children’s graphic novel published entitled “The Dinosaur That Got Tired of Being Extinct”.