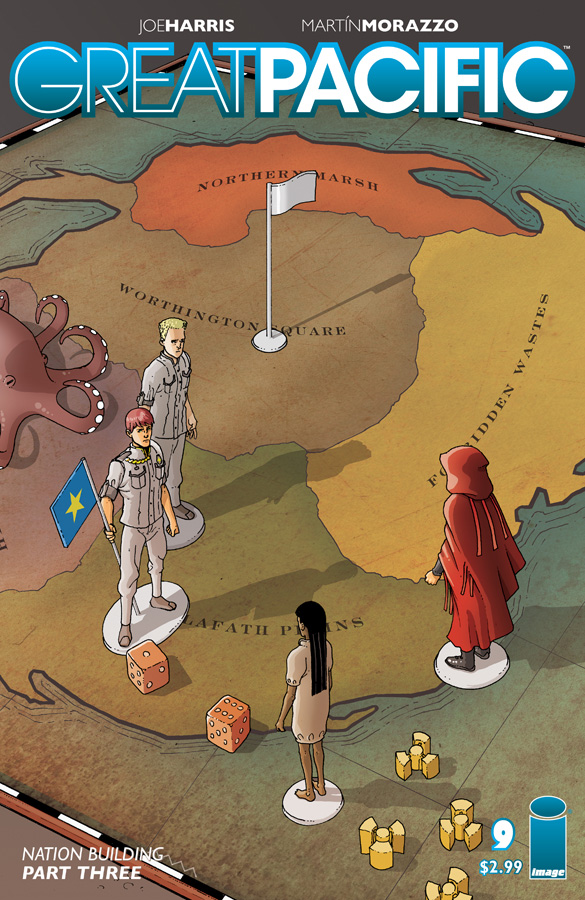 Great Pacific operates on an offbeat premise that could have done reasonably well as a six or seven issue mini-series that we all would have then forgotten. Instead, as an on-going series, it continues to mature from it’s quirky beginnings into something much more dramatic and worldly. In issue nine, we start to get a real sense that what began as a beneficiary of Image’s “throw it against the wall and see if it sticks” policy of releasing creator owned titles, is turning into something that people will be talking about long after it’s over.

For those who may not know, let me give a quick synopsis: Chas Worthington, the young heir to a multi-billion dollar oil empire vanishes one day along with his best friend and eventual secretary of state, Alex. Chas has a plan to turn the Great Pacific garbage patch into a sovereign nation of his own. The first story arc, now collected in graphic novel format, is the story of the early days of a fledgling nation of toxic trash, complete with angry natives, pirates, nuclear weapons, and a giant, mutated octopus.

In this second arc, starting with issue seven, we see the settlement of New Texas a year and a half later, with a population nearing a thousand souls and terraforming operations underway to turn the patch into a cleaner, safer place to live. We see Chas as a benevolent if not subtly ruthless leader, making deals and swindling his cabinet, and most of all trying to deal with the hostile elements threatening his newborn society. Issue nine (which has a great cover, by the way) lets us in the door of Chas’s most dangerous dealings yet: negotiations with an envoy of the West Rhodesian government to get Chas an audience at the UN. As far as I can tell, West Rhodesia doesn’t actually exist, though there was a time when the country of Zimbabwe was called Rhodesia by some. Also, the conditions in West Rhodesia as well as its fictional President Chukwu seem to be metaphors for Uganda and Idi Amin, though my understanding of these bits of world history is seriously lacking. What we do get very clearly, however, is that Chas is making a deal with the devil, and we and everyone around him can only hope that he knows what the hell he is doing.

Make no mistake, the world of Great Pacific is our world. It may contain a bit of tweaked science and geographical fiction, but it has both feet firmly planted in the politics and tension of Earth, 2013. This current arc, titled “Nation Building,” sees the story growing up, turning away from the sci-fi quirk and going straight for international political thriller.

It’s very difficult for me to tell readers to run out and buy the third issue in the second arc of a series like Great Pacific. It’d be like handing you a novel, flipping to the middle, and telling you to enjoy yourself reading to the end. All I can do is try to sell you on the series, which is currently available in trade and single issue at your nearest comic shop or internet depot, and which I can say with some confidence is a shining example of the diverse story-telling potential of this medium we all love. If you find yourself browsing and see it on the shelf, give it a chance. You may be surprised.