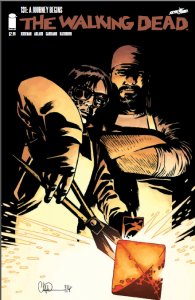 You’d be excused for suffering from a bit of The Walking Dead fatigue. I know I have, in the past, wondered What more can they do with these characters in this situation?

And then an issue like this one comes along to remind you that What more can they do? is not strictly a rhetorical question. Last issue writer Kirkman, Adlard, Gaudiano, and Rathburn subverted our expectations in the face of a possibly returning Big Bad. This issue the crew begins building a mystery that is genuinely mysterious — a rumor from the field that there have been “murmurs” heard from the dead. Do the dead speak? Kirkman et al. also advance the story of Our Gang, building on the brilliant — yes, I said brilliant! — decision to advance the timeline two years, three issues ago. Most of the issue follows Rick and Carl on their trip to the Hilltop, where Maggie has been running things. Carl is moving to the Hilltop to pursue a blacksmith apprenticeship, and Rick is reconnecting. The issue is filled with beautiful moments that would seem pedestrian if I tried to describe them here, but each piece builds into a pretty nice whole. Meanwhile, back in Alexandria, trouble is brewing with the new folks. A lot of seeds sown this issue!

The mission of this series is people trying to go on living and thriving while existential horror fills their world. Adlard’s art serves this mission admirably, as it has for a long long time. I hope I’m not damning-with-faint praise by pointing to his reserve as one of the strengths of the art. The matter-of-fact style depicting outrageous grotesqueness is more effective than any elaborate grand guignol-ish spectacle could hope to achieve. This same dynamic is reinforced by the “gray tone” work of Rathburn, which seems, on the face of it, unimposing. But it’s remarkably effective, contributing to the vision so fully that, when I saw the credit for “gray tone” I found myself pausing and thinking, “Oh … right … it’s not in color.” Well told, understated pretense produces a more real emotional experience than baroque abundance.

And the understatement also means that when the team does pull out the stops (Glenn? Anyone?) it’s that much more powerful.

One of the strongest aspects of The Walking Dead is how skillfully it rejects the primary conceit of serial fiction: that the characters all reset after each arc. Years have passed since issue one. Years have passed since the All Out War, and the characters have actually grown by years in remarkably believable ways. Relationships are shifting. And Carl is growing up and – I swear to God — becoming my favorite character. If you’re really wondering why, just look at that cover — my favorite of the year

VERDICT
So easy to take ongoing goodness for granted — The Walking Dead still has it. The series has it’s fallow moment, but this issue (the first of an arc) is excellent in its own right and filled with promises of an awful time for our heroes, but a great time for us readers.